For a long time now — perhaps even too long, if recent experience is any indication — I’ve avoided x64 Vista on my production and test machines. Myths and rumors about lack of drivers, stability issues, software compatibility problems, and more, had dissuaded me from using the product on my production or test machines.

But no sooner did I find myself in a situation where 64-bit Vista was an absolute necessity for setting up a virtual machine host platform that could host both 32- and 64-bit test environments for a book on Windows 7 I’m working on, than I also learned that “news” to the contrary notwithstanding, 64-bit Vista is both workable and pretty robust. To jump to the end of the story before returning to the middle for more details, I’ve now installed 64-bit Vista on a couple of notebook PCs (each with 4 GB of RAM) and a desktop PC (with 8 GB) without too much difficulty and with very good results. To me the biggest thrill of all comes from seeing this kind of display in Task Manager on a machine with 8192 MB of RAM: 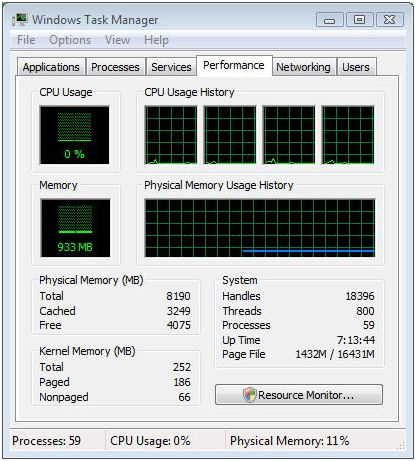 I don’t know where the “missing 2 MB” of RAM went, that being the difference between the amount installed 8192, and the amount showing here (8190), and I’m not sure I really care. What I do appreciate is access to nearly all the RAM (99.975% in fact) that I installed in the machine.

Why did I do this? Because I had to be able to install both 32- and 64-bit versions of Windows 7 on a platform that would let me shoot screenshots of the installation process at work. Today, this means one of three approaches to obtaining the needed screencaps:

Needless to say, I opted for the latter, and have now set up and run virtual machines (.vhd files) for both 32- and 64-bit versions of Windows 7 Premium edition versions of the new beta OS. Throughout, the 64-bit Vista Business software I’m using has been stable, accommodating, and workable. I haven’t yet figured out how to create a VM greater than 4GB in size, so I’m thinking I may need to build a configuration with 12 or more GB of RAM to make that possible. Other than that, I’m a pretty happy guy right now.

In installing the 64-bit version on an MSI and HP notebooks with 4 GB of RAM I encountered exactly zero driver issues: everything came up with a working driver immediately upon the install, and I was able to use DriverAgent to get the default drivers updated to the most current versions without too much difficulty. I did hit a snag on my Asus P5K motherboard, primarily because the built-in GbE interface identifies itself as Attsanic but the most recent drivers are now from the renamed builder’s Website at www.atheros.com. Once I figured out that the L1 GbE Ethernet interface I wanted was now an Atheros product, I was able to find, download, and install the right drivers pretty quickly thereafter (though I was lucky to have access to other machines so I could download those drivers and read them from an easily-inserted UFD).

I’m working with the RC version of Windows Vista Business with SP2 slipstreamed, and I must also observe that I’m impressed with the stability and capability of the upcoming Service Pack, scheduled for release some time in May. Looks like this will be a worthwhile upgrade!