As of today — Friday, October 12, 2012 — the Windows 8 General Availability (GA) date is two weeks away. On Thursday, Oct 25, or Friday, Oct 26 (there are conflicting reports) Windows 8 will be unleashed upon the world, and all of the Windows OEMs can finally start selling hardware with the new OS pre-installed. With that date in mind, I’ve read oodles of announcements from vendors including Lenovo, HP, Dell, Acer, Asus, Sony, Toshiba, Samsung, and so forth about a slew of new desktops, laptops, and tablets that will attempt to make the most of Windows 8’s new capabilities, especially touch, in a wide range of sizes, weights, and form factors. 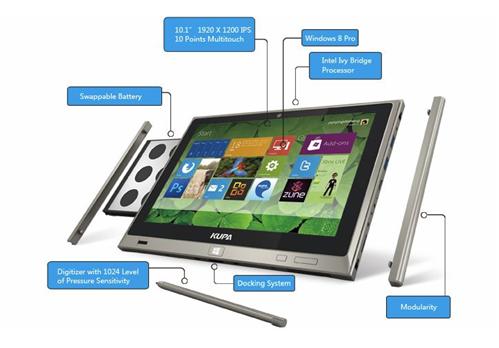 Removable side rails provide access to ports and a removable battery.

Yesterday, I came across a discussion on ZDNet by Sean Portnoy entitled “Kupa UltraNote Windows 8 tablet offers modular design for maximum customization,” where the device in question is shown in a semi-exploded view in the preceding graphic. It’s the first Windows 8 tablet I’ve seen so far that really gets me excited about the potential for new and powerful systems that take strong advantage of the new OS. Of course, the pricing information isn’t yet available, and I have to believe we’re looking at a box that will cost no less than $1,000 in its most minimal configuration, with prices over $1,500 easily conceivable. But perhaps that kind of pelf is worth expending when you get something really powerful and usable in return, as legions of high-end MacBook owners will be only too happy to tell you.

The Kupa UltraNote has two really interesting features that I believe give it a powerful leg up over most of its competition. First, it uses two detachable rails on the left and right hand edges of the tablets’ surface to provide access to a compact and removable battery on the left, and to provide access to two USB 3.0 ports, an HDMI port, and a SIM card on the right hand edge. Second, while the company promises 7 hour life from the battery, a quick swap to a backup unit doubles that time to a very nice 14 hours. To my way of thinking, this makes the UltraNote eminently suitable for day-long use, even on some pretty long days. A docking unit will increase battery life to 12 hours (there’s a second battery in this portable base), and also includes an attached keyboard, more USB ports, GbE and addtional video ports, and an SD card reader.

The tablet will support Ivy Bridge mobile ULV processors in the i3, i5, and i7 families, and includes a 10.1″ 1920×1200 IPS monitor with 10-point MultiTouch support (more than enough to achieve Windows 8 Touch logo certification). A digitizer pen is also included, and the touch sensor supports a staggering 10 bits of pressure sensitivity (1,024 levels). Built-in RAM starts at 4GB, and may be expanded to 8 GB (it’s DDR3, but no info is yet available on its speed, though the form factor is sure to be SO-DIMM; from what I see on the Ivy Bridge ULV specs it can’t be over 1,600 MHz and the graphics come from an Intel HD 4000 GPU). By itself, the tablet weighs 1.67 lbs (760 grams)  — only 15 grams more than my iPad 2 with the magnetic cover attached. Connectivity options include 802.11 a/b/g/n and even 802.11 ac, with add-ins for 3G/4G LTE, Bluetooth 3.0/4.0, RFID, and even NFC. There are two built-in cameras: a 2.0 megapixel unit on the front, and a 5.0 mexapixel unit on the back.

Here’s a side-on profile view of the Kupa UltraNote, that shows the Windows 8 logo at bottom center, just above the docking connector, with air vents off to the right.

Side profile shows how thin this tablet is, and how bright and sharp the screen.

Though the proof won’t be possible until I can hold the unit in my hand, and use it for a while, this is the first Windows 8 tablet I’ve seen that makes me think: “Hey, this unit can hold its own against the iPad!” Let’s hope I’m right. And if I am, I’m going to buy one.