As I’ve learned to build various types of bootable CDs and UFDs with the Vista-based WinPE environment, I’ve also been working to learn more about its inner workings and capabilities. As I struggled to figure out how to add Windows Explorer and some kind of Web browser to a runtime WinPE image (which usually takes the form of a Windows image file named boot.wim or something similar) I discovered what might not unfairly be called the “ultimate Windows PE resource.” It’s a Web site that serves a very active and capable developer and user community called VistaPE.

Let me explain what makes VistaPE tick first and foremost, then explain what VistaPE has to offer. The foundation for VistaPE is a scripting and Windows build tool called WinBuilder. It works from either Windows XP or Vista to create boot disks (and in fact, incorporates WinPE 2.0 for Vista into the Vista side of that equation), but it goes way beyond what the basic Microsoft toolkit provides via imagex.exe and the other basic elements in their toolbox. VistaPE builds on this foundation to add significant applications and capabilities on top of the WinPE 2.0 kernel to support a more-or-less complete graphical user interface (GUI) environment. Thus, the VistaPE runtime environment–which is incredibly user-configurable and flexible, and continuously extended and expanded upon through a growing script library–is more like a “real Windows” than a basic command line interpreter (CLI) environment.

Here’s how I found VistaPE: In seeking to extend my WinPE skills and abilities, I’d started trying to research methods to include Windows Explorer in the WinPE environment after reading several postings online that (a) mentioned this could be done and (b) finding no concrete details on exactly how to do so. My basic computer science training told me that it would require mapping out the code dependencies from within Explorer to determine what other DLLs and executable elements were required to make the program run. I quickly discovered thereafter that some DLLs must be registered with Windows as well as present in the runtime environment to work properly, after a simple analysis with Mark Russinovich’s dllist utility failed to produce the desired results. That’s what led me back on the research trail and, ultimately, to the VistaPE Web site.

I knew I’d struck paydirt when, after downloading and installing WinBuilder and the VistaPE script library, I was able to produce this screenshot: 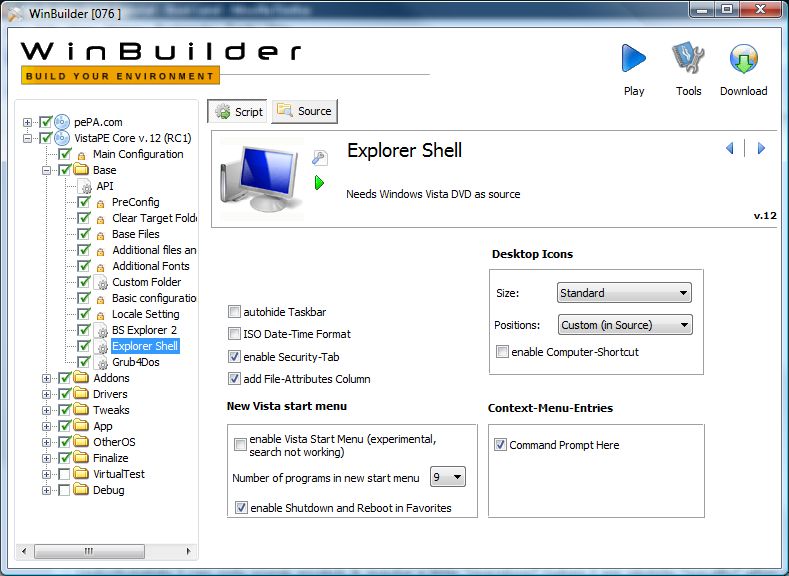 As it turns out, adding Explorer just barely begins to describe what VistPE can do within WinBuilder. It also provides an alternate and somewhat more functional graphic file system interface tool called BS Explorer 2, and even supports the Linux-inspired Grub4DOS boot management toolset.

But beyond the VistaPE Base toolset shown in the preceding screenshot, please note the other major checkbox elements in WinBuilder’s left-column pane:

To me, VistaPE is an entirely new and wonderful world of capability and functionality that cries out for more study and improved understanding. I’ve already been able to use it to build much more powerful and capable boot images than I had been able to hand-craft on my own. But I can also see that there’s a great deal more going on here than immediately meets the eye, or falls readily into my grasp. If you dig into this environment, you’ll come to the same realizations equally quickly yourself. Please check it out soon!

Berlodo - 11 Mar 2009 7:01 PM
Beware [ULIST] Worm/Trojans![/ULIST] This VistaPE looks like a great project BUT .... some of the files from the download site are infected with Worm/Trojans ... I downloaded WinBuilder twice today ( 11 march 2009 ) once at work, once at home -- the first download (at work) only saved a small file and I was suspicious (surely lt would need to be MBs in size and this was only a few 100's K) but, still I ran it after extracting from archive -- it was Virus infected -- i tried a second time and it downloaded a much bigger file -- this now seemed legit -- but the original Virus alert scared me off. later, at home, I downloaded a different earlier version of the Builder (full size, this time) and all seemed ok until I ran the tool for first time and it failed with a Virus alert while building the *.iso -- alert (AVG Free) says : WormAutoIt.FCX
[-]

Ed Tittel - 11 Mar 2009 9:28 PM
Dear Berlodo: My apologies for your troubles. According to the principals at Boot-land and VistaPE their sites got compromised last week (after I wrote my blog about the sites, I can't help but also observe) and indeed some of their downloads became infected. They're working like mad right now to clean everything up. In the meantime, they recommend that you download the full project from this link http://winbuilder.net/download.php?view.37. Nuno Brito, the creator of WinBuilder, says that some scans may be triggered for this file because it contains several AV packages, some of which include virus signatures (which of course can be interpreted as the real thing, rather than a sign of the real thing). Here's the analysis of the file from Virus Total an online virus scanning service: http://www.virustotal.com/analisis/132612c12ea9baece1b0788da7bcff80. It finds two suspicious elements, both of which occur inside AV packages (eSafe and VBA32). I've downloaded and scanned this file with Norton, Spyware Doctor with AntiVirus, and F-Secure, none of which find anything malicious. I've used this software repeatedly on five different Vista machines for the past couple of months, and none of my various malware packages has ever registered a complaint. --Ed--
[-]

Berlodo - 12 Mar 2009 5:23 PM
Dear Ed, Thanks for your very prompt reply ... it's great to hear that the site admins are fixing this issue .(thanks to your intervention)... I'm gonna give it another day or two for everything to settle down before trying to download it again and will report back here when successful. It sure looks like a brilliant project -- I hope my previous post hasn't put other potential users off, -- Berlodo -- (kudos to Ed for discovering this tool and spreading the news)
[-]

Ed Tittel - 12 Mar 2009 5:51 PM
Dear Berlodo: You are more than welcome. I'm so glad to interact with folks who actually "read" my blog, that I'll bend over backwards to try to help in any way I can. The guys at WinBuilder/Bootland/VistaPE are really great, with a maximum of functionality and responsiveness and absolutely no BS whatsoever. Given their example, how could I do otherwise? Thanks again, and take care, --Ed--
[-]

Berlodo - 3 Apr 2009 5:38 PM
Dear Ed, Just a note to say I got started with VistaPE. Successfully built the *.iso and got it to boot under MS Virtual PC 2007. Very impressive ! It's amazing that it included a Web Browser, Opera --- I can see that this will be very useful in an I.T. Support environment e.g. when a user's hard disk won't boot you could have VistaPE on a bootable USB stick to get emergency access to their data on hard disk (if it's readable) and copy it off to a network share or USB hard disk, while giving them emergency web access, via Opera, to corporate Intranet and Webmail. Looks like my earlier alert from AVG is a false positive .... this is explained on the Forum with a workaround, see : [A href="http://www.boot-land.net/forums/index.php?showtopic=7130"] I am aiming to get it working via PXE eventually so that it could be booted across the network ( we have an old version of 3Com Boot Services and I got vanilla WinPE booting from this ... after a lot of hair pulling, but that's another story ..) Thanks again. -- Berlodo --
[-]

Iamwithin - 1 Jan 2010 10:24 PM
Dear Ed, I went to the trouble of registering just to say thanks! I spent the last three days learning teaching myself WinPE 2.0 and like you I wanted an Windows Explorer and after surfing I found the program A43 which I added to WinPE so I could browse and save files if catastrophe struck. Well I succeeded and was now about to try and write a script file to load the browser automatically, when I landed at your blog, and man am I glad I did. VistaPE looks like a candy store to me. ;-) Thanks for taking time to tell us about it, and have a Happy New Year. Bill Skiles in NC
[-]

Ed Tittel - 2 Jan 2010 10:15 AM
Dear Bill: You are more than welcome. It's comments like yours that make writing this blog worthwhile. Best wishes, and happy new year! --Ed--