US and India based online ad network and data analytics company Chitika reported in late April 2012 that “millions are already using the latest Microsoft operating system every day” (Study). In fact, the title of their study proclaims that “Windows 8 Consumer Preview Usage Double that of Mac OS X Mountain Lion,” the most current Mac OS X version in use when the study was conducted and reported. Here’s a chart that shows the breakdown of the study’s user population based on “hundreds of millions of ad impressions from within the Chitika Ad network” taken from April 13 through April 19, 2012: 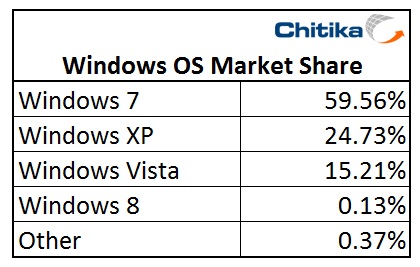 On the Web today 0.13% translates into millions of users

Perhaps the most amazing thing about the study is understanding that if “millions” from the Chitika point of view translates into 2 million actual users, that puts the total size of their sample population at 1.5 billion, give or take a few hundred million one way or the other! This also roughly matches the size of the total online global population, which gives the company a loooooooooong reach. Given that the size of their sample is reported as hundreds of millions in size, however, their total base has to be under a billion by definition, which means that their breathless “millions of users” is probably not much over the one million mark, if it truly is that much. I can’t find any concrete published numbers from Microsoft on the total number of copies of Windows 8 CP downloaded, which would set a hard upper bound on the number of potential users, either… In any case, that still points to  a pretty sizable user population for the Windows 8 Customer Preview.

On a more serious note, these kinds of adoption and usage levels do seem to indicate that Windows 8 has some kind of future ahead of it, no matter how dire or delirious some pundit’s predictions about its success or failure might be. As far as I’m concerned, while the jury is still way out on how much uptake Windows 8 will enjoy in the marketplace, there’s apparently no shortage of willing users even now, before the new OS has gone all the way commercial. What I want to watch, very closely, is how many buyers opt for Windows 8 by choice when buying new PCs once that option is presented to them. This will be a far more telling statistic, as and when such numbers make themselves available late next October and through the end of 2012.