On October 29, 2011, in a blog entitled “Win7, XP Reach Crossover Point,” I reported that StatCounter’s tracking indicated that on or about October 14, the number of PCs on the Internet running Windows 7 exceeded the number of PCs running Windows XP for the first time. Of course, not everybody agreed with those numbers (as evidenced by Ed Bott’s discussion in my November 2 blog “Windows 7 vis-a-vis Windows XP“) where many actually prefer the tracking that NetMarketShare does instead because of its global purview and better detail.

Recently, reports indicate that the crossover point for the two operating systems — that is the now-venerable, 11-year-old Windows XP that simply refuses to die, and the latest production Windows 7 OS that is still finding its legs even as the shadow of the next-and-future Windows 8 OS begins to make itself known — are imminent, according to NetMarketShare. Take a look at these graphs and data points: 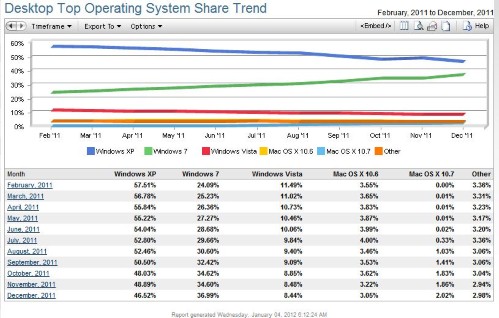 If I read the graphs correctly, the NetMarketShare trend lines for Win 7 and XP indicate that the crossover point will occur in late February or early March, as the two numbers converge in the neighborhood of 40% share for each one. And with Win7 on the way up as Windows XP is on a slow but steady downward course, this finally puts Windows 7 in the driver’s seat.

What’s interesting to me is that different forms of measurement produce the same results (Windows 7 overtaking Windows XP) but at dates as much as half a year apart. It’s all in how you measure, what you measure, and where those numbers come from!