In the past couple of weeks, I’ve noticed an increasing number of signs that Windows 8 really is gearing up for full-scale commercial launch. For one thing, last week Lenovo posted a Windows 8 version of its System Update Facility, which has now been happily downloading updates to my X220 Tablet ever since. So far, Lenovo has pushed new drivers for the X220 Tablet’s Ricoh Media Card Reader and a new Audio driver its way. I’ve also noticed the frequency of new beta drivers for Lenovo stuff is slowing down, as more final stuff starts getting into regular update channels. It truly is starting to look as if Windows 8 stuff will be going into normal update and delivery status in time for next week’s GA. 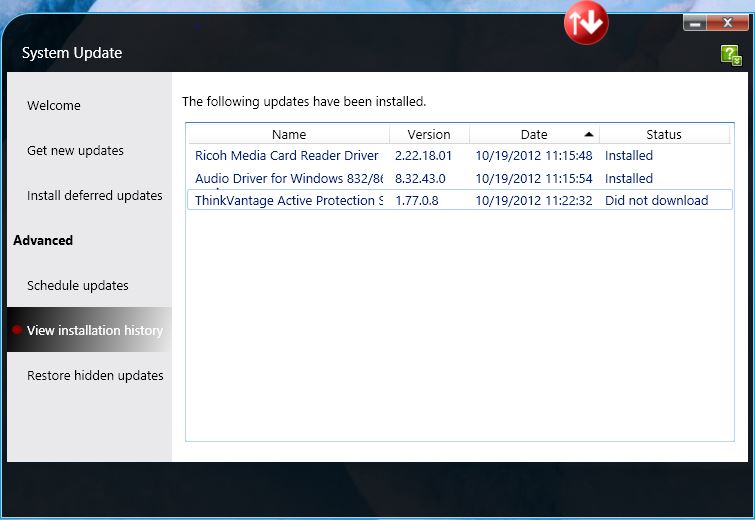 Two hits and a miss from the Lenovo System Update utility.

The same thing is true for my desktop Windows 8 system, too. Just yesterday, Windows Update pushed the latest nVidia driver onto that machine (GeForce R304 Driver, version 306.97, release date 10/10/2012). Ditto for an update to the IntelliType software for that machine’s Comfort Curve 2000 keyboard from Microsoft. Because driver compatibility with Windows 7 has been very good, there may be a few more items that show up via update for Windows 8 machines, but my gut feel is we’re not going to experience a huge upheaval once the GA date comes and goes.

That’s not to say that things are completely easy-breezy just yet. Many of the Lenovo ThinkVantage elements aren’t yet “officially available” for Windows 8, including the “home base” element — namely, the Lenovo ThinkVantage Toolbox — along with ThinkVantage Rescue and Recovery (backup and repair utilities), Drive Space Manager, the Lenovo Hardware Scanner, and so forth. In fact, the Lenovo Support pages are running impossibly slowly as I write this blog, which leads me to wonder if they’re not madly posting Windows 8 related updates right now… I’m seeing strange URLs there that include strings like “LegacyDocID=MIGR-61431” which make me wonder if they’re not perhaps in the process of updating their entire document management system, and migrating from an old platform to a new one. Stands to reason that they would do this before Windows 8 goes GA, and a whole new world of support opportunities opens up before them! That might also explain why I can’t seem to get the new Windows 8 Active Protection System element to download to my tablet PC, either.