I’ve been working a lot in the office lately on projects that require lots of printing. My trusty Samsung ML-2850 networked printer was acting up over the weekend, in fact. I noticed some banding or streaking of toner on output pages, and wondered how much toner was left in my current cartridge. But when I tried to find out, I realized that  I hadn’t installed a driver version that could illuminate printer status and supplies for me. When I found what looked right at SoftPedia, I ran into an error message when I tried to install the program. It took me a while to figure out what was going on. But eventually, I realized I was benefiting from cert revocation on the file’s digital signature. 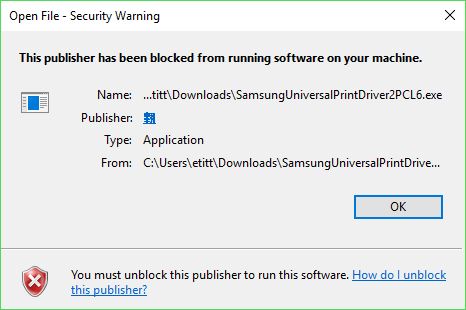 Why would Samsung be blocked from running software on my PC? Thereupon hangs this tale…
[Click image to see full-sized view]

How Does Blocking Install Lead to Benefiting from Cert Revocation?

Good question! I had to dig a bit to figure this out. As it happens, MS maintains a registry of digital signatures for software. Checking that registry is part of the UAC process in deciding whether or not to permit installation to proceed. Publishers have the option of updating their signature status after the fact, so they can withdraw items from circulation (or render them moot). I’m not sure if what I ran into was an old, formerly valid program having been withdrawn from circulation, or if the program from SoftPedia simply says it’s a Samsung installer, and is actually something else. Either way, though, I don’t want it on my machine.

Warned by this block message, I dug into the Samsung site. There, I found a program called “Samsung Easy Printer Manager” that I was able to access through the downloads page for my printer’s make and model. The blocked software shows up as “Easy Deployment Manager” on the Details pane of its Properties page in File Explorer, so I’m inclined to think the program was legit, but is now out of date. But who knows: maybe I dodged a bullet!