In my frenzy to test and evaluate Vista SP2 for stability I built myself a test system around the slipstreamed version of Vista x64 SP2 RC available from MSDN for download to subscribers. And while my results were overall positive–FWIW, SP2 seems to add significantly to Vista stability and uptime–it appears that I’m now faced with a painful dilemma about when to scrub the machine and rebuild with the just-released production version.

So, off I go to find the expiration date for the RC. It turns out that whenever one exists, it appears in the “About Windows” information for any Windows release. I scratch my head a bit to figure out how to do this, then run winver at the command line: it does the trick nicely. 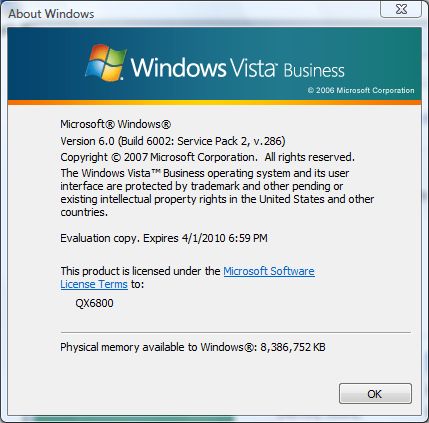 Upon seeing the details, I heave a sigh of relief for numerous reasons. First, there’s no compelling reason to act soon, with just under 11 months to go before this OS turns into a pumpkin. Second, there’s every hope that the commercial release of Windows 7 will be out before that date (and I may even be able to perform an in-place upgrade to x64 Windows 7 Professional from this version if the stars smile on me). Third, this being a test machine after all, circumstances (read: new work) may compel me to rebuild this machine for any number of reasons well before the expiration date arrives.

All this said, however, there is a moral to this story: When MS says you shouldn’t install an RC version on production gear, they’re not kidding around. You do have to be willing to bite the bullet sometime after installing one of these versions, and replace the install with something else (that is, a so-called “clean install” that wipes out all the work involved in setting up the machine with the RC and its accoutrement) in its stead. I’m glad that my primary work on this machine consists of building various VMs to use for testing inside Virtual PC 2007. Presumably I need only copy those constituent files to a backup drive, rebuild the underlying system, then replace them in the “My Virtual Machines” folder to keep on using them no matter which version or kind of host OS is running to support them. More on this later, I’m sure…