With UEFI replacing BIOS on most modern PCs, and SSDs for boot drives, many rigs use fast boot settings to launch into action as quickly as possible. Some machines boot fast enough to make detecting and responding to Function key input problematic. Microsoft recognizes this, and has added new capabilities to Windows 10 to instruct the PC to use an alternate boot source as part of system restart. It’s not without some “interesting wrinkles” however. I discovered some of them in learning how to boot Win10 from USB media on my various tablets, notebooks, and desktop PCs recently.

There’s a new Advanced Startup directive that appears in the Windows 10 Recovery menu. You can access this option in at least two ways:

If you can get to your UEFI/BIOS during bootup easily, you can also use an alternate boot selection outside the OS to target an alternate boot source, including bootable USB media. My ThinkPad laptops make this easy using the blue “ThinkVantage” button. On fast boot desktops, this is usually not an option unless one disables fast boot beforehand. But this technique works on all of my Windows 10 PCs across a wide variety of machine types: all-in-ones, mini-itx PCs, convention desktops, laptops/notebooks, and hybrid devices (a Surface Pro 3 and a Dell Venue Pro 11 7139).

Restart now means what it says, so be sure to save all work before clicking the button!

Potential Gotcha 1 When You Boot Win10 From USB Media

I did run into a couple of gotchas when using this facility on my various PCs. When you click the “Restart now” button, it performs an immediate reboot. After bootup, it produces a “Choose an option” screen that includes “Use a device” among its selections. That’s the one you want to pick. So far, so good… 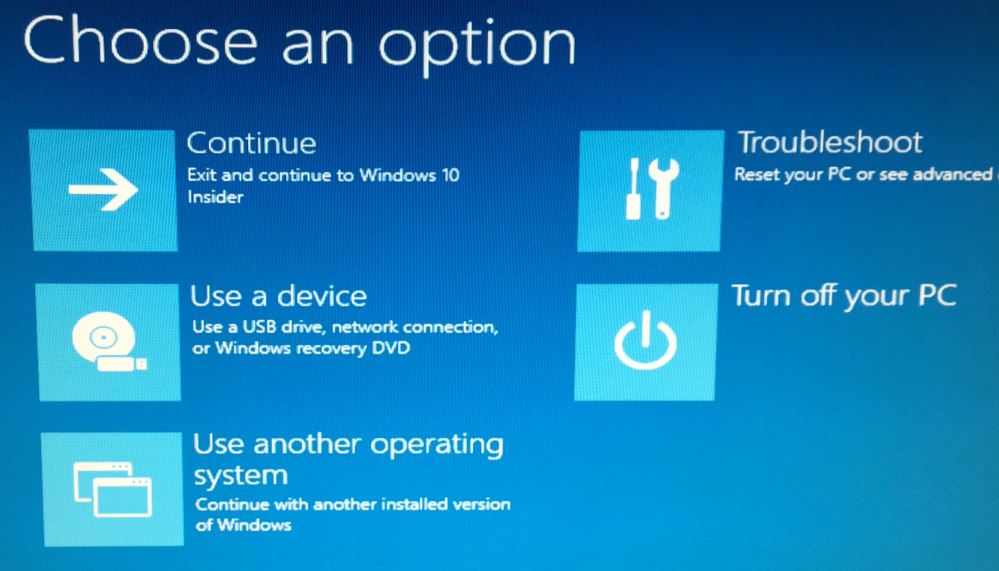 Next up, comes a list of devices from which you can choose. This is where things get interesting, because device names aren’t always crystal clear. On my desktop PC, the device name obligingly reports the make and model of my USB Flash drive. That makes it easy to select as my boot source, as shown (Mushkin). 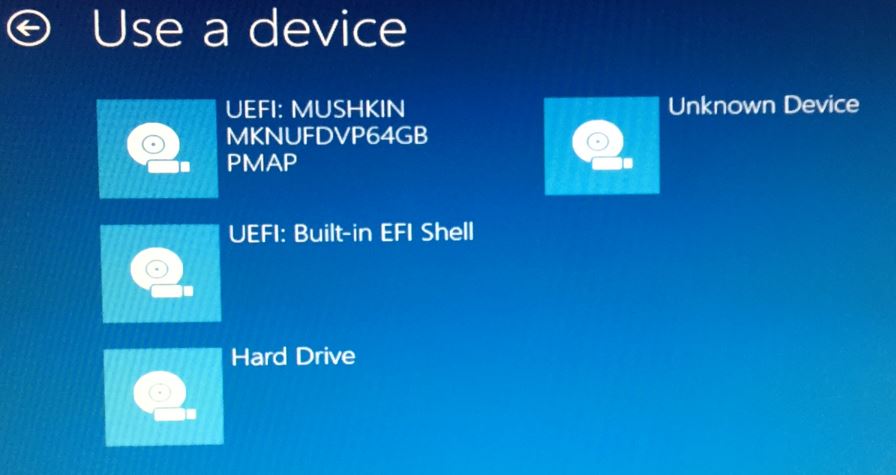 But on my Lenovo X220 Tablet, my options include only a bunch of generic names such as USB CD, USB FDD, ATAPI CDO, and ATA HDD1, among others. I used the ThinkVantage key to invoke F12 boot selections to see how my boot UFD appeared there to learn that I wanted the one labeled USB CD (go figure). That was my first gotcha. It may require rebooting once to see what the default options, then again with the UFD plugged in to see what’s new in the mix. Ultimately, that’s what I did on the X220T to use the Windows Advanced Startup Options facility.

Another gotcha also manifested when I first started using this tool. As is my typical practice, I remoted from my production desktop to a test machine to get to work. But when I did, no Advanced Startup Options appeared on the Settings/Update&Security/Recovery page. Turns out it’s not accessible via RDP. Don’t bother trying…

Gotchas aside, the facility is a good one. It’s worth using when you need an alternate boot source for a PC for troubleshooting, repair or installation. Add this one to your bag of admin tricks, please!