OK, so yesterday was the day that I put together a brand-spanking new Windows 8 desktop system for my upcoming book Windows 8 in Depth (due out from Pearson in late October, 2012, or whenever Windows 8 goes into general availability release). Here’s a partial “bill of capabilities” that I made sure were present, so I could exercise ALL of Windows 8’s new and improved capabilities:

I cannibalized an older test system with a Q9400 Yorkfield CPU and an older LGA 775 motherboard, replacing motherboard, CPU, graphics card, and memory to put the system together. It took me less than an hour to install all the new parts, and the system turned over the first time I powered it up.

To all appearances, I was on a quick trip to Windows 7 installation, to be followed by a quick migration to the Windows 8 consumer preview. But I found myself badly stuck trying to install Windows 7 from a DVD or a bootable UFD (USB Flash Drive). In fact, I got nowhere for a couple of hours at which point I called my friend and motherboard expert Tom Soderstrom (a regular contributor to and editorial staffer at Tom’s Hardware) to ask for some guidance.

Turns out he’s worked with that very same motherboard extensively, and observed that it’s very finicky about memory. I had recycled 4 2GB SuperTalent memory modules (DDR3-1600) into that machine not even thinking that memory timings might be an issue. After yanking two of the modules (Tom told me the motherboard behaves better when only two of its four memory slots are populated) and reducing the slightly overclocked memory timings to their so-called XMP (eXtreme Memory Profile) values, the Windows 7 installer actually started working a little, whereas before the installer would hang just after loading the Windows Pre-installation Environment (PE) stuff signaled by “Windows is loading files…” at the very start of the install process. 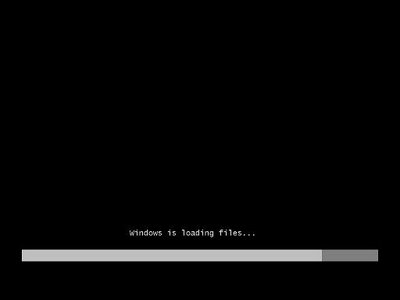 All of this, but nothing more!

Once I realized the memory was biting me, I grabbed a couple of 4GB G-Skill memory modules from a different test machine (DDR3-1333 instead of DDR3-1600 and thus, not so aggressively overclocked) and swapped them for the SuperTalent modules. Instant success! This just goes to show you that automatic overclocking isn’t always a good thing (apparently when the UEFI started up, it saw the high-speed RAM and assumed it should run it at its top-rated speed, and that’s what caused my system instabilities). The slower memory wasn’t subject to that same level of speed, and everything worked like a charm. Even with the slower RAM installed Windows 7 experience reports 7.8 for both processor and memory, and 7.9 for everything else (graphics from the nVidia GTX 560 Ti is 7.9 for both business and gaming, and the SSD I’m using for the boot drive also garners the same rating).

So now I’ve got Windows 7 installed, all the drivers fully updated and I’ll be installing Windows 8 and the 3M touch screen next week (I need a mini-HDMI to regular HDMI cable to make the connection from the PC to that display device). In the meantime, I’ve been trying to play with UEFI to understand more of how it works, but so far Asus hasn’t been too supportive in letting me access the UEFI shell or various UEFI tools that are now readily available — check out the Website EFI Zone for access to various EFI shells and tools. I’m going to have to learn how to create an EFI-accessible UFD and/or DVD to get to the UEFI command line, but so far I’m still figuring out how to make that happen.

On my Lenovo X220T tablet, however, I now have Windows 8 installed, and am futzing around getting touch to work properly. I’m guessing the download servers for the customer preview must be really slammed, because it took me over four hours to download the files after I’d started up the relatively small (500K) bootstrap loader to fire off the initial installation process. Windows 8 is a huge change from all the Windows stuff I already know, and it looks like it’s going to be an interesting experience to learn and document all of the new functionality for our book. Stay tuned: three’s going to be LOTS more to report over the next four months on this front.

005 Toshiba I core 5 laptop . Before a un timely demise that landed it

into the Best Buys store to get this one.I had to get to load the system myself .Which I didn't know a "lick of sense"About the system.

So I had a customized system(Which It was a dismal end to a never ending lost )Windows 8 Which got a up grade to 8.1.

Well enough of that!

So my point was that ,wisdom gave some clues though I still learn

With my second one that I acquired I an HP with an iCore 7 .I've

better(With the help of the Geek Squad up here in the Seattle area.)

in there?(As one could tell That I'm not fully computer literate).My

first recovery in,which I'd did have the back-up disc.Though I didn't

get to retrieve the data back from the disc.(It was of the cd/Rom).

Lost it all.When I'd tried several times.Found out that I'd didn't have

no back-up .When I did a recovery Which wiped out my Apps and

I hope one could at least acknowledge me about my exp.

Consider the post acknowledged. I'm not sure if your Satellite model has a conventional BIOS or uses UEFI instead. The best way to check would be to find and download the owner's manual and see what it says. Failing that, you could always call Toshiba tech support. I can't seem to find the information online for that specific model. If you'd care to e-mail me you can reach me at ed at edtittel dot com (with the appropriate character for word substitutions) I'd be glad to work on this with you further.