I’ve long been a fan of Nitro’s excellent PDF products, which are invariably faster, cheaper, and more secure than Adobe’s PDF offerings. On Wednesday, they announced their latest Nitro PDF software (mine is version 7.0.1.2) which provides some way-cool new enterprise oriented features to complement its core PDF creation and management capabilities, which are designed to let users “…create, edit, secure, sign, and share PDF files … intuitively…” in the words of that self-same announcement.

I spoke to Nick Chandler (Nitro PR & Community Manager) and Chris Dahl (Nitro CTO) on Tuesday from Australia in advance of the release, having also been granted a sneak preview of the software in advance of its official release the following day. What intrigued me about this latest version of Nitro PDF Professional, which offers all of the most important features of Acrobat at no more than 50 percent of the price ($120 list for Nitro Pro versus $242 for the deepest discount I can find on a Standard and complete version of Adobe Acrobat X), are the enterprise deployment features that have been added to the product.

Nitro PDF Professional’s enterprise deployment capability includes support for its distribution and management through SharePoint, Documentum, and Autonomy Worksite, all widely used content management and control systems. While it’s always been possible to build and distribute Nitro PDF Pro through standard package creation and distribution toolsets (like Microsoft’s SMS or Systems Center Configuration Manager), this adds considerable clout and reach to methods for deploying Nitro Pro. In particular, given the many hosted Web and services solutions that now ride on SharePoint, it brings heavy-duty distribution technology and controls to smaller organizations and companies in the SMB space. That’s why Nitro PDF 7 works for companies as large as Continental Tire (with 130,000 employees worldwide), as well as Boeing and Toyota, but also makes a great fit for small-to-medium-sized businesses as well.

Other cool new features of Nitro PDF Pro 7 include the adoption of a ribbon style UI, with the ability to create custom stamps, and an optimized rendering engine (imported from the most recent release of the company’s flagship Nitro PDF Reader) that speeds both content parsing and its visual delivery on-screen. The program even includes a Protect tab, with built-in security and redaction features to control document access or block out sensitive info for public distribution. 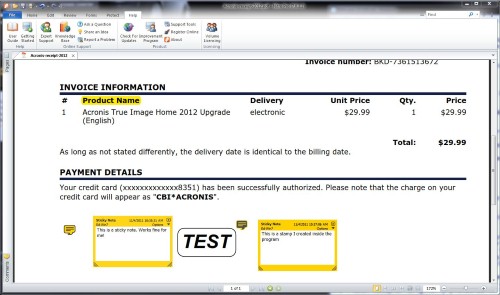 Check out the ribbon, stamps, and stickies!

Future efforts on the Nitro products will exploit emerging APIs for Windows 8, just as current versions exploit important APIs for Vista and Windows 7, such as Explorer’s Preview handler and thumbnail integration. Chris Dahl put their future plans this way: “Each iteration of the software is an incremental improvement over previous versions that leverages general Windows UI guidelines. While we keep out interface consistent, we always try to enhance functionality or improve user interface behavior, as we did with the adoption of the Ribbon metaphor in this latest Nitro PDF Pro version.”

For my money, NItro PDF Pro is definitely worth checking out, especially if you don’t need the more sophisticated PDF bells and whistles that make Adobe Acrobat a more expensive proposition.

[Note: Nitro PDF Professional volume licensing starts at 11 or more licenses, and Nitro staff are quick to observe that volume licenses obtain “significant” discounts vis-a-vis their published list price. One of their goals is to counter the tendency to provide a small number of staffers with copies of Acrobat, who then must handle “PDF stuff” for everybody else by making PDF tools affordable enough to distribute far and wide inside modern, productive organizations. A 20% discount to $100 is currently available to early buyers of this program as well.]