I’ve been working with Windows operating systems since version 3.0 or thereabouts, starting in mid-1990. As I do the math, I’m stunned to realize that means it’s been almost 22 years since first climbing onto the Windows bandwagon. And now that I’ve spent five full days working with and using the customer preview, I can say that I’ve never hit the learning curve wall so hard with any other prior version of Windows before — not even Vista or Windows 7, both of which upped the ante considerably over Windows XP. Even the switch from Windows 3.x to Windows NT — itself a pretty major change-up — doesn’t come close to matching what I’m seeing, learning, and experiencing right now.

Let me provide an example. As I’m groping around on the desktop I’m encountering new looks and capabilities for standard built-in Windows tools, some of which are both very good and quite welcome. Thus, for example, the Task Manager now includes  a start-up tab that provides direct access to Windows startup items (it’s no longer necessary to fire up msconfig.exe or some other 3rd-party tool such as Autoruns, CCleaner, or Revo Uninstaller to use their many and varied tools to manage what starts up with Windows and what doesn’t). Now, you can simply right-click (or press and hold, in the touch idiom, to match that capability) on an item in the new Task Manager Startup tab to enable or disable individual items. 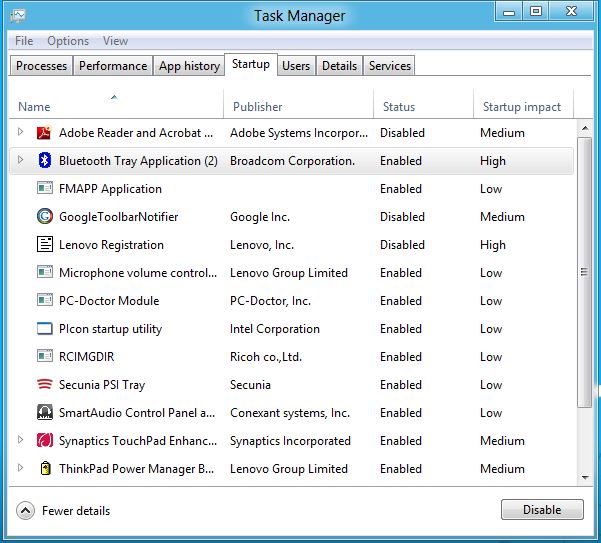 This is a very nice little improvement that comes with Windows 8, but I had to do some “interesting learning” to make a screen cap of this item. I had to poke around in Windows\System32 to learn that the new name for the built-in Snipping Tool in Windows 8 is now “SnippingTool.exe” instead of “Snipping Tool.exe” as it was in Windows 7. Then, I got lost in a blind alley of errors trying to pin the Snipping Tool to the Taskbar (this provokes an error message when you attempt to launch the tool from there that reads:

The procedure entry point SfmDxBindSwapChain could not be located in the dynamic link library C:\Windows.old\Windows\System32\dwmapi.dll.

This tells me that Windows 8 is looking for stuff from my prior Windows 7 install (the Windows.old directory tree gets created when you do an upgrade install on modern Windows versions, including from Windows 7 to Windows 8). But when I use the “Windows key – R” combination to open the Run command window and type “snippingtool.exe” there, the tool runs just fine. Go figure!

As I’m learning bits and pieces about the system, I find myself having to figure out how to get to specific tools and applications in the absence of a Start menu. So far, the best method for doing this has proved to be using the Start Menu on Windows 7 to nagivate to the program I wish to launch, then using the name of its .exe file in the Run command window. But as I learn more, I’m hoping I’ll figure out a better way.

One thing’s for sure: the search and pattern matching capabilities in the Run window come nowhere close to those for the Windows 7 Search box in the Startup menu. Who’d have thunk that I would miss this tool so much as I grope further and further to find my way into a proper approach into Windows 8? In the meantime, shortcut key combinations and Windows OS file spelunking help me to get the job done!