I knew something interesting was up when I saw a blog post from Adrian Kingsley-Hughes this morning entitled “Microsoft gets it right with Windows 8 on ARM, and why Apple should be worried.” I must also hasten to add that I’ve just been hired on as one of two authors for the upcoming Que book Windows 8 in Depth (due out at the same time as the new OS itself, probably sometime around the end of October 2012), so I’ve been getting increasingly interested in the whole “mobile side” of Windows 8 anyway.

Windows for ARM explored and explained

Between yesterday’s Building Windows 8 blog post “Building Windows for the ARM processor architecture,” and Kingsley-Hughes’ ZDNet blog post this morning, my life and this particular job have just gotten a lot more tricksome. Although I’m still very much in “Huh?” mode — which is to say, still trying to figure out what’s been said, what’s going on, and how to understand these things properly — it is already obvious to me that Windows on Arm (aka WOA, which I choose to pronounce like the command you’d give to a horse: “Whoa!”) is going to mean major changes for Windows 8 but also major changes for the mobile device landscape in general, particularly iOS and Android. 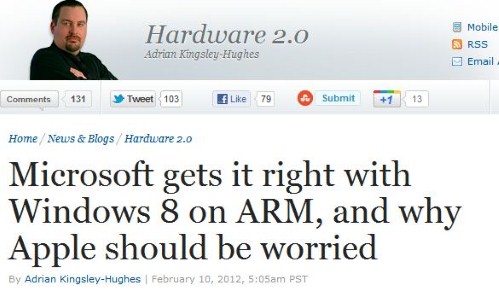 AKH expounds on the ARM connection with eyewitness WOA news

Part of the appeal for this new Windows OS model is that you can use and work on at least some of the same data and applications on a mobile device, including a smartphone or low-end tablet device (like the iPad, with all due respect for its considerable good looks and capabilities) as well as any more conventional convertible tablets, notebooks, or desktop computers that might be running that same OS. Although Sinofsky himself writes that “WOA is new member of the Windows family, much like Windows Server, Windows Embedded, or Windows Phone” and that “…WOA builds on the foundation of Windows, has a very high degree of commonality and very significant shared code with Windows 8, and will be developed for, sold, and supported as part of the largest computing ecosystem in the world” I’m still not completely sure about what all of this really means.

That’s where Kingsley-Hughes’ blog post sheds some interesting light on the whole situation, after he got a sneak preview of WOA running on an ARM-based device in somebody’s test lab somewhere far, far away. He does a nice job of summarizing the high points of the BW8 blog post referenced a couple of paragraphs back. Interestingly the conventional Win8 and the WOA8 (if I can coin some version-based references here) have quite a bit in common, including UI look and feel (for Metro and even those parts of desktop that ARM will support), timing, MS Office support (at least, for Word, Excel, PowerPoint, and OneNote). The differences are also pretty telling, but are all strongly motivated by the limitations of ARM-based platforms, which are usually smaller, less memory-rich, and with fewer CPU cycles to burn: no virtualization or emulation, no support for native x86/x64 applications, and no software-only distribution (you must buy a device with WOA pre-installed is what I believe this means). Other key points: WOA PCs will use different labeling and branding to “avoid customer confusion” and WOA devices should feel more like consumer electronics rather than full-blown, traditional PCs.

So far, so good. When Kingsley-Hughes got to see a WOA device somebody else was driving, and he wasn’t allowed to take any photos or capture any screenshots, so obviously this stuff remains pretty loosey-goosey. But if this information is all correct, it’s not unreasonable to expect a WOA preview to get unleashed along with the consumer preview release scheduled for Leap-Day (February 29th) this year. He also saw MS Office 15 apps running on this WOA device, and reports that “…the ARM versions of Office appear to offer all the features of their desktop counterparts…” and that “they’re highly customized for touch.”

The notion that Windows remains solidly Windows, even on an ARM platform, is what drives Kingsley-Hughes to forecast potential worries for Apple (and if he’s right, I think they extend to Google and Android as well). Where Apple has maintained a deliberate separation between MacOS on stationary PCs and notebooks, and iOS on iPhones, iPads, and iPod Touch devices, it looks like Microsoft is going to do its best to deliver a completely consistent (if not application- and legacy-functionality complete) version of Windows across all platforms on which it runs. Quite rightly, I think he sees this as a potentially revolutionary move, one that has the potential to shake up the current order of things, and revamp the computing spectrum from mobile devices all the way to server clusters. Should be interesting to watch this unfold!