In May of 2010, I posted a blog here entitled “New Nitro PDF Knocks Your Socks Off,” wherein I profiled my introduction to and growing satisfaction with the free Nitro PDF Reader. Over a year later, it’s still my PDF tool of choice, and I even forked over US$80 to purchase a copy of the professional version that adds support for distilling PDF and various annotation, editing, and formatting options (the list price for the program is US$100, but if you look around or wait for discounts you can usually find 15-20% off deals here and there). To me the things that make Nitro PDF Reader preferable to the Adobe or Foxit Readers are: a small executable, blazing fast performance, and value-add features out the ying-yang (other readers charge for most, if not all, of these).

The latest user interface also adopts the Windows 7/Office 2007&2010 ribbon model. It looks and runs very nicely. Nitro PDF Reader 2 looks like it’s more than earned a spot on my “must-have Windows applications” roster. I’m going to spend a month or so with the program, after which I’ll report back on my experiences and continuing impressions. 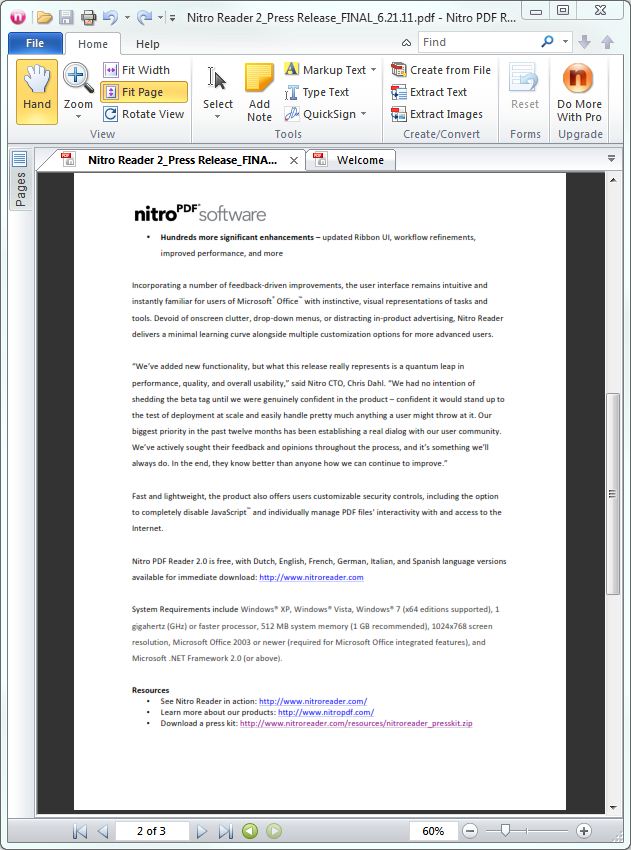 I’m also pleased to report that Chris Dahl, Nitro PDF’s CTO, informed me yesterday by phone that Nitro PDF Reader is now using a single code base for both x86 and x64 versions of their programs. In the past, there had been some delays in obtaining x64 versions of the program, and it was more difficult to lay hands on the x64 version of the code. No longer. The base code for the application (the PDF renderer and UI portion) is actually the same 32-bit component, and runs as a 32 bit image on the x64 WOW (Windows-on-Windows) environment. The PDF Creator portion however (which requires a device driver, and thus can’t use 32-bit code) is implemented in native 64-bit code. Both portions installed seamlessly on my x64 test machine, and this version appeared to run just as fast (if not faster) than its 32-bit counterpart. This should be a real boon for the increasing number of users who are now running 64-bit Windows versions.