Before the latest cumulative update for Windows 10 (KB3124262) appeared on 12/27, I’d already run into a problem with theKB3119142 “Update for Microsoft Visual C++ 2012 Update 4 Redistributable Package” on a couple of my PCs. I’d also fixed it fairly easily, having discovered numerous reports of this problem in various self-help repositories on the Web, most notably Answers.Microsoft.com and TenForums.com. As the repeated entries from the snippet of Update History from an affected machine shows below, the update keeps reinstalling and reinstalling though each installation is reported as “successfully installed.”

The fix, as it happens, is pretty straightforward, so I’ll provide step-by-step instructions:

I haven’t yet found an explanation as to why this is happening, but it stops the endless cycle of repeated reinstallations cold. Given that 3 of my 7 current PCs experienced this issue, and that I see hundreds of reports from others suffering likewise, I have to believe this is a reasonably widespread phenomenon. Thus, I’m hopeful that an understanding that this problem, while vexing, is not terribly serious, along with a recipe to bring it to a screeching halt, will be helpful to those legions of Windows administrators out there. Given access to a decent automation facility such as PowerShell, AutoIt, WinAutomation, or something else in the same vein, one could easily script a quick utility to execute this repair on any and all affected machines during the next scheduled data cycle using your normal deployment tools.

The following screen capture makes it crystal clear as to the obvious symptoms that manifest when this issue is present on a Windows 10 PC (I count 10 recurrences in a 5-day period). If you start seeing something like this, now you know what to do! 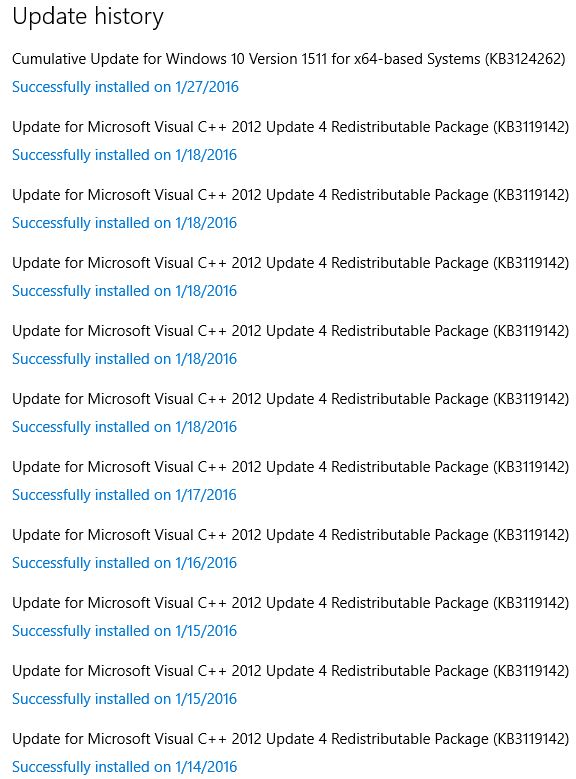 Though successfully installed, KB3119142 keeps going like the Energizer Bunny.