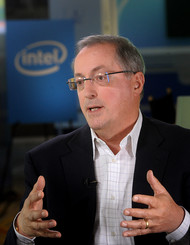 The trade press wires are buzzing with news from an unnamed source at Intel who attended a company event in Taiwan this week (see this Bloomberg story for representative reporting) that attributes Intel CEO with remarks to the effect that “Windows 8 is being released before it’s fully ready” and that “Windows 8 bugs could hurt Microsoft.” Extremely interesting remarks, methinks, from the CEO of a company much of whose core business hangs upon the success or failure of Windows in general, and that has told analysts it expects the Windows 8 release to have a positive overall impact on its sales of CPUs and chipsets for x86 PCs.

Microsoft spokesperson, Mark Martin, responded to this reporting in typical corporate style as follows: “With over 16 million active preview participants, Windows 8 is the most rested, reviewed, and ready operating system in Microsoft’s history.” These remarks certainly reflect my own experiences in installing, running, and using — and even occasionally, intentionally trying to “break” — Windows 8, starting with the Developer Preview late last year, and progressing through the Customer Preview, Release Preview, and RTM versions that have been released this year.

What with recent projections from Intel cutting their third-quarter revenue forecast by 0.9-1.3 billion dollars, and citing “lackluster demand for PCs,” I find myself wondering if Otellini isn’t seeking to shift blame for market conditions away from the chip-maker that employs him and onto the shoulders of the Colossus of Redmond, as some occasionally refer to Microsoft. While those shoulders are certainly broad, I’m not sure they can carry the burden of the success or failure of the entire PC market by themselves. If you ask me the real culprit is slyly fingered in Bloomberg’s closing remarks that “… the PC market may not grow this year as customers [especially in emerging markets] flock to smartphones and tablets.” For those who can buy only one computing and communications device, the reach and power of modern smartphones like Android and iPhone models may simply represent a better and more affordable value proposition than PCs do. Paradigm shift, anyone?