In the past month, I’ve replaced my previous production desktop — a still powerful and more than adequate QX9650 quad-core based machine that I installed with a 32-bit version of Windows 7 Ultimate, long, long ago whose memory limits had simply become intolerable for me — with a new production desktop — it’s built around an i7-930 Bloomfield (45 nm) CPU, but has a fast OCZ Vertex 4 180 GB SSD and 24 GB of RAM. At the same time, I also moved an old Dell All-in-One 968 printer up to my wife’s office upstairs, and plugged in a newish Samsung ML-2851ND laser printer in its stead.

Ever since I’ve swapped the printers out, my production desktop has occasionally hung or shut itself down automatically from time to time. Even more curiously, those events correlate pretty much directly with the use of the printer, and are more pronounced for long or demanding print jobs. I’d been scratching my head about this and wondering what was up until the solution dawned on me and I fixed the problem with the switch of a single power cord plug-in. All the information you need to solve this puzzle is included in this photo of the cable maze under the desk in my office. 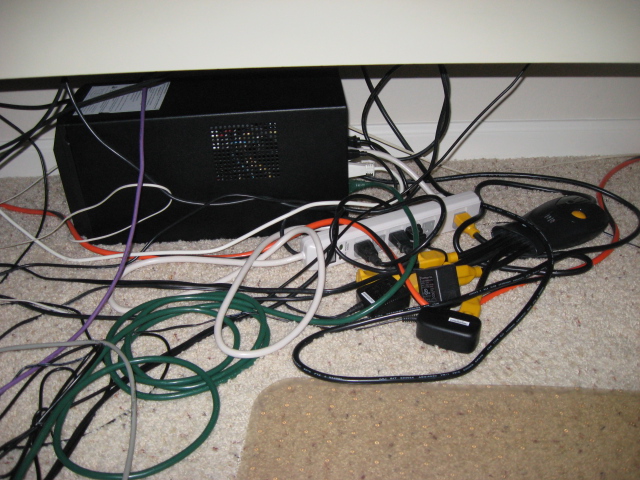 I have a couple of dozen devices plugged into my APC 1500W UPS.

My Smart UPS 1500 is an older UPS, but still works with the latest APC PowerChute Business Edition software (v9.0.1). But when I switched the old printer for the new one, I neglected to take into account the difference in power draw between the two units. The Dell is an inkjet which sips a very modest peak of 32W. The Samsung, though much smaller than the Dell unit, is a laser and pulls a much less modest 400W at peak consumption times.

I had literally pulled the plug for the AIO 968 and inserted the power cord for the Samsung ML-2850ND into the same receptacle. I hadn’t stopped to think that a laser draws significantly more power than an inkjet, because of the high-temperatures the fusing wire must generate to melt the toner and get it to stick to the page while printing. As soon as I pulled the plug from its receptacle in the octopus you see with the yellow plug ends at the right hand side of the photo, and plugged it directly into the wall outlet, all my problems were solved, solved, solved.

And guess what? The UPS is no longer beeping at me every hour or two (which it was doing each time the printer woke up, and apparently coursed some voltage through the fuser), either. I just wish the PowerChute software had been smart enough to tell me that it was getting excess voltage demands instead of just making noises. But that’s the way it goes sometimes when troubleshooting mysterious and intermittent system problems.