Last week I wrote a blog post entitled “One small change to my PC, one giant PITA to implement,” wherein I recounted the issues and frustrations involved in what I thought would be a quick and simple SSD swap-out on my production desktop. Thanks to a recent memory upgrade from 4 to 24 GB that followed as a consequence of finally upgrading from 32-bit Windows 7 Professional to the 64-bit version instead, I had to kiss off 24 GB for my paging file and another 18 GB for the hibernation file. Alas, that left the original 128 GB OCZ Vertex 2 SSD a little short of workspace. With actual disk space available of 119 GB as reported  in Windows Explorer, the remaining 77 GB didn’t leave me enough room to accommodate the OS, plus files and applications, with 30 GB of free space left over to keep 25% of the disk free for the OS to “do its stuff” at runtime.

So, I switched over to a brand-new 180 GB Intel 520 Series SSD, in part to switch from the older 3 Gbps SATA II interface on the OCZ Vertex 2 to the new 6 Gbps SATA III interface on this drive. And thereby hangs today’s tale, because the only SATA III ports on my Asus P6X58D-E motherboard come from a two-port Marvell 9128 SATA controller. The other ports on this motherboard emanate from an Intel South Bridge 82801JR chipset, aka ICH10R, but they support SATA II, not SATA III. Here’s some of what the Intel SSD Toolbox has to say about my current set-up right now: 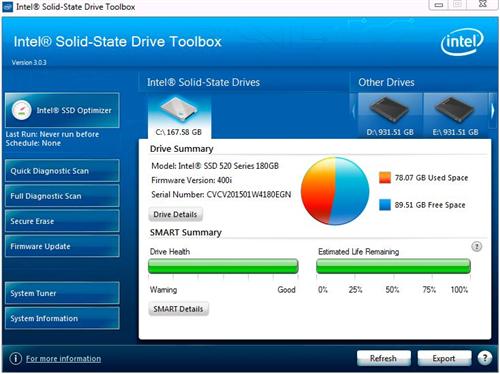 It took some serious spelunking and a drive update to get this much out of the Intel SSD toolbox.

To get this far with the Intel SSD Toolbox, I had to do some serious digging around on the Internet, which took me to an excellent (and free) French device driver Website called station-drivers.com, where their Marvell page turned up a 9128 driver dated July 9, 2012. Before I downloaded and installed this driver package — which also installed an Apache server on my PC that I later removed — the SSD toolbox couldn’t recognize the make or model of my Intel SSD at all. But as the preceding screen capture clearly shows, it can now recognize the drive and its firmware version. But alas, here’s what happens when I try to use the Intel SSD optimizer, which normally runs weekly to clean up and optimize its SSDs: 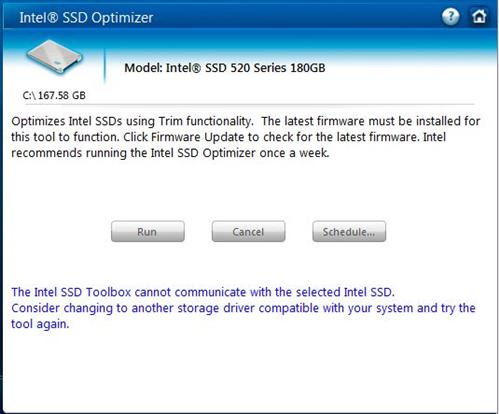 Further research on the Web shows that the issues with the 9128 and the Intel SSD toolbox are well-known and -documented. Newer drivers might someday offer more relief, but for now it looks like I’ll have to switch back to the ICH10R SATA ports to get the SSD Toolbox to work to fullest effect. And from what I read on the various Intel and Marvell (and PC enthusiast) forums, it may ironically turn out to be the case that I’ll get better performance from the ICH10R SATA II ports on that motherboard than I’m currently getting from its Marvell 9128 SATA III ports. One thing’s for sure, the CrystalDiskMark numbers from the current set up come nowhere close to Intel’s claimed 550 MB/sec for read, and 500 MB/sec for write for this particular SSD. I’m getting just a little more than half that, as these CrystalDiskMark benchmark results illustrate. 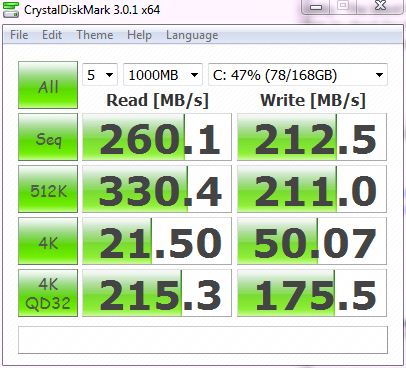 The read/write numbers barely edge above 50% of Intel’s claimed performance for this SSD.

This weekend, I’ll unplug the box, pop open the case, and switch the motherboard end of the SSD’s SATA cable from a Marvell port to an open ICH10R port (I still have 3 left). If I observe anything startling or especially interesting, I’ll post again next week to report on what I learned. But man, was I disappointed to realize that just because my motherboard has SATA III ports doesn’t mean that they’re actually GOOD for the uses to which I’d like to put them. Who knew that not all SATA III ports are created alike, or that not all of them work equally well with various SSDs? I kind of thought that the whole point of a standard bus was not to have to worry about who’s building the parts on either end of a connection. Oh, well: Live and learn!