I’m a subscriber to PC World and always make time to flip through the magazine when it hits my mailbox. It was with some interest I looked over Preston Gralla’s recent piece on Soluto, a (beta) program that performs a thorough Windows boot analysis and recommends various ways to shorten up that sometimes long and over-extended process. In theory, this software installs itself to load just after the OS kernel kicks off, and then watches and tracks everything that happens thereafter to report on what it’s seen when the system completes the boot process. 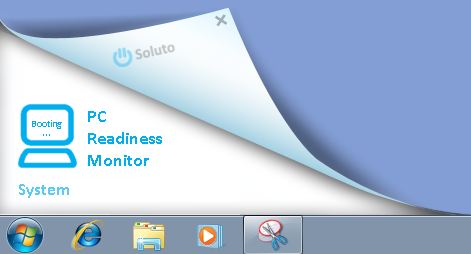 1. Soluto is still in beta.
2. If you visit the community pages at Soluto.com, you’ll find plenty of problem reports (some mild, some downright horror stories) with people having boot issues and other problems after installing the software. Some BSODs, some “black screen of death” issues, lots of boot issues, and general problems with Windows 7 x64 versions.
3. I joined the BSOD club when I tried it on one of my 32-bit Windows 7 test machines, but fortunately, the system did boot in Safe Mode and I was able to successfully uninstall the software and return to normal operation after that. I did, however, have issues with a successful uninstall on x64 versions.

It’s a very interesting piece of software and promises to ultimately provide useful information for inveterate system tweakers and/or IT professionals charged with building standard boot images for Windows. If it were working properly and generally right now, I’d stick it in my toolbox without a second thought. As it currently stands, it’s a work in the early stages of commercialization and it may not even be fit for fooling around with on test machines. It’s certainly nowhere near ready for any kind of serious production use.

But gosh, I do hope the developers work out the kinks and turn it into production quality software. If so, it could indeed be a useful Windows system analysis and performance optimization tool. The interesting thing about Soluto is that it touts itself as “anti-frustration software” — but alas, as far as I’m concerned, this slogan only seemed to draw attention to the very problems it caused for me! And while I’m qvetching, the program seemed to take forever to install and uninstall, especially on the x64 Win7 systems (on which it’s currently not working, and for which I couldn’t get uninstall to complete successfully, either — though either a restore point or an image restore does put everything back the way it was before Soluto came along). Sigh.

Is causing the problem you claim to solve troublesome?