For the past five months, the Current Branch for Windows 10 (Builds 1604 and 1703) has been subject to a spurious DISM issue. (I blogged about this as far back as December, 2016.) That is, running DISM with the /checkhealth option returns a “healthy” verdict. OTOH, the /scanhealth option indicates the component store is corrupted but “repairable.” It turns out the cause of the issue is a version staging file that’s associated with the Win10 image, but not included in the .wim file itself. That’s why I’m pleased to report that the recent cumulative update KB4016871 fixes spurious Win10 DISM issue. There’s a small bit of user/admin effort required to effect the fix, as this sequence of PowerShell cmdlets shows: 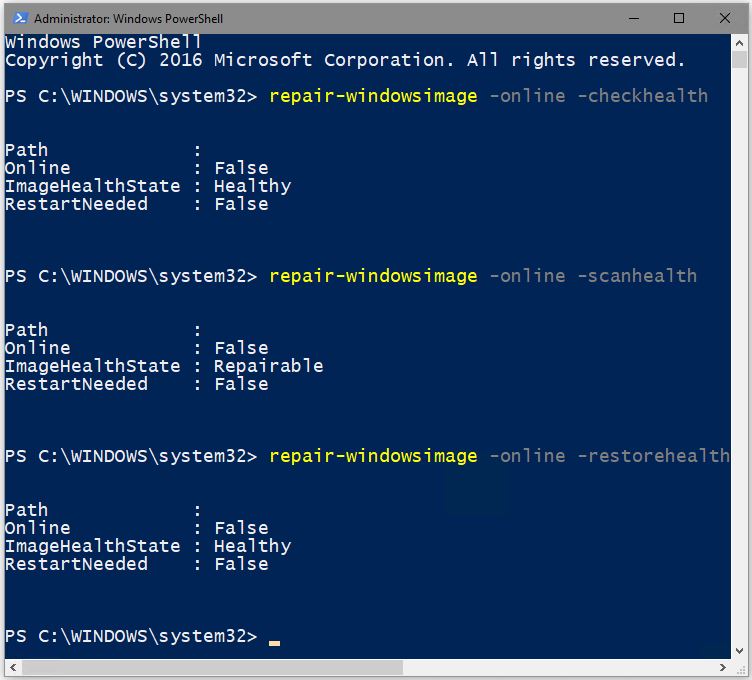 This sequence of cmdlets shows a contradiction between items 1 and 2, and the fix in item 3.

I’ll explain the what and how. But first, let’s review what the preceding screencap shows:

The second cmdlet corresponds to dism /online /cleanup-image /scanhealth. Although it’s run on the same image as the preceding cmdlet it returns a negative result for “ImageHealthState.” (“Repairable” means that it has discovered potential corruption that can be repaired.) The CBS.log file shows the culprit is a missing file named (its name is loooong, so it wraps across two lines):

Once the afore-cited cumulative update is applied to the online image, however, the third cmdlet now works! It corresponds to dism /online /cleanup-image /restorehealth. This clears the error condition, and shows that KB4016871 fixes spurious Win10 DISM issue at long last. We know this because ImageHealthState shows as “Healthy” upon completion.

Apparently, the cause of this issue is that the TestRoot and FlightSigning Package file identifies a specific bit of staging and version identification data. In fact, Windows Update uses it when running the Unified Update Platform (UUP) to decide what updates to download. Thus, it’s not really part of the Windows Image file itself and, though referenced, doesn’t turn up when a deep health analysis runs against a targeted Windows image. This produced some kind of error in an earlier release of Windows 10 Current Branch, but is now rectified with Version 1703 (Build 15063.296). One must still run the final cmdlet or its native DISM counterpart to finalize that fix, though.

[Note added later on 5/22, thanks to posters Bree and s0urce at TenForums.com] It looks like the repair actually comes from Microsoft, courtesy of the online image checks that are part and parcel of the way DISM works. Here’s a quote from Bree’s post on the subject:

It would seem that the ‘source not found’ error was not just referring to finding the source on the local PC, but also to a failure to find a valid download for the package on MS’s servers. This would appear to be what @s0urce says MS have fixed ‘internally’.

Whether or not KB4016871 is a prerequisite is a moot point (I suspect not). What is essential is to run DISM once more now that MS have fixed things at their server end so that the working packages can be downloaded and the repair completed to 100%.