Among all of the many speedy SSD drives out there, the Samsung 830 drives are close but not at the top of the pack (see, for example, the Tom’s Hardware SSD Hierarchy Chart which puts it behind the OCZ  m4 and the Intel 320 series). But when this Newegg deal hit my inbox this morning, I just had to share it with my readers because it’s a genuine “Killer Deal:” $90 for a nominal 128 GB drive (actually, more like 120 GB is reported in Windows Explorer as the drive size, thanks to the difference between 1 billion bytes in decimal and 1 GB in binary). 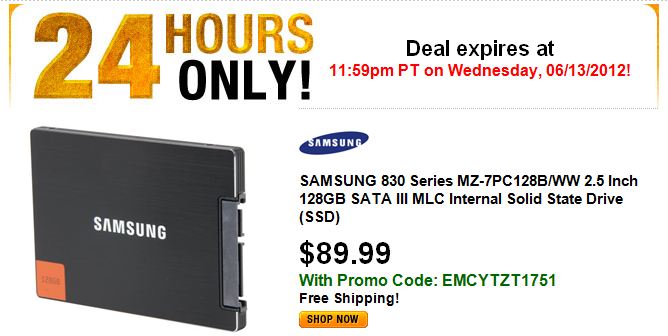 About $0.75 per GB remains pricey but a great deal for a pretty fast SSD

It’s a great add-on to just about any PC, be it a boot drive for a desktop, or a general replacement drive for a notebook. If you’re in the market, and have the cash to spare, this really is too good a deal to pass up. Follow this Newegg link to get to the Samsung 830 128GB product page, and don’t forget to use the Promo Code EMCYTZT1751 as you work through the payment process.