In the past several months, Microsoft has introduced special Windows-8 oriented peripherals including a variety of “touch mice” and keyboards designed to help conventional PC users maximize their Windows 8 experience. Last week, Logitech followed suit with a collection of Windows 8 touch devices (and some keyboards) as well. 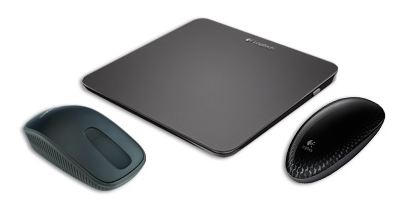 These devices are designed to support use of gestures on their surfaces (and to control cursor movement) to help users take advantage of Windows 8’s touch-oriented user interface without necessarily acquiring a touchscreen. I see this approach — which Microsoft also supports with its various touch mice — as a more affordable way to upgrade existing systems to Windows 8 without having to replace conventional monitors with touchscreen counterparts. Besides for regular systems (and most business applications) there’s simply no reason to use touch all that much, expect for UI navigation anyway. This approach makes a nice and affordable compromise available to users or organizations that may not even want to pony up for touchscreens anyway. Here’s a little more information on the three devices depicted above (all three work with the Logitech unifying receiver, with no word about Bluetooth versions available as yet):

Look for these devices to hit stores on October 25, when Windows 8 GA ships.