Anybody who’s worked on Windows PCs regularly knows the drill to obtain an alternate “Safe Boot” screen instead of allowing the normal boot sequence to grind to its normal conclusion: wait for the POST/BIOS bootstrap phase to end, then start banging the F8 key (or whatever your platform or motherboard vendor requires instead) like mad to get its attention. With luck, you’ll be able to pull up the safe boot menu on your first try. I’ve sometimes had to try two, three, or even four times before I got my timing right on some PCs.

With Windows 8 machines that use the Uniform Extensible Firmware Interface (UEFI) instead of BIOS to boot, this can apparently be even more of a problem (if not downright impossible), as explained in a recent Building Windows 8 blog entitled “Designed for PCs that boot faster than ever before.” Seems that when UEFI enables fast booting, there’s simply not enough time for it to detect the keystrokes necessary to invoke alternate boot behavior. On machines that take only seven seconds to boot, goes the blog post, individual boot component runtimes are too simply too short to interrupt. 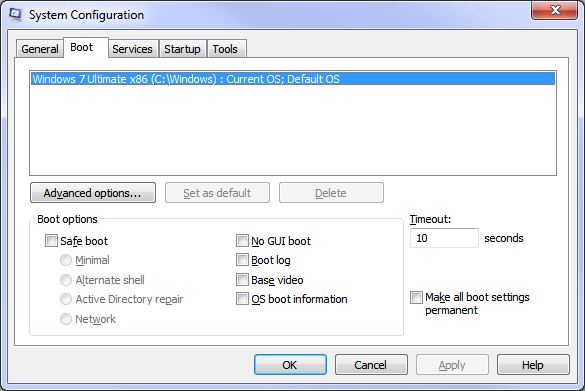 Msconfig.exe has always let you force safe boot-up before rebooting

To handle this situation in Windows 8, Microsoft has created a single boot options menu that works equally well with touch or with mouse input. A new Windows Startup Settings item in the Windows 8 Advanced Options pane lets users provoke boot options ahead of time as well, if they want to use the boot options. Also, any time the Win8 OS detects potential or real issues during the boot process, it will also produce that screen so users may partake of its options, tools, and facilities. This comes from the Advanced startup on the General Tab of PC Settings, whose options depend on whether or not your Win8 comes from a UEFI- or BIOS-based install. You can pick settings from the Charms, then More PC Settings, then General, then scroll the right-hand elements until you see Advanced startup — but be warned, if you decide to “Restart now” you will reboot your PC. Or you can search “Settings” for Advanced startup, and get there quicker.

Kind of makes me wish I could find detailed instructions on performing a UEFI install of Windows 8 on my Lenovo X220 Tablet. That machine has UEFI, but it installs the OS in BIOS mode by default. I’d love to try this new functionality out, and will do so as soon as I figure out how to make this happen on that machine. If anybody else knows of any resources to help with this, please point me at them (and thanks!).