In my most recent blog “More Interesting Windows Network Troubleshooting” I recount some recent and both interesting and vexing issues I encountered while bringing up my new HP MediaSmart Server (MSS) EX-495, which has now replaced my trusty but failed EX-475 here on the Tittel Home Network. My first round of problems, as it happens, were self-inflicted: HP warns against manually messing with drivers for the MSS but I elected to update the RealTek PCIe GBE Family Controller in the EX-495 anyway.

Bad move! Turns out this wreaked havoc on the server’s networking behavior and characteristics. Whereas with new driver I could only back up about 400 KBps from my Dell D620 notebook, with old driver that number zoomed by half an order of magnitude to something in the range of 2-2.5 MBps instead. I was also unable to complete a successful backup of my new HP notebook, though speeds were just fine.

After I explained what I had done, service agent Cathy Merrick politely but firmly insisted that I run the server recovery disk for the server, and reminded me that HP won’t support non-standard configurations anyway. With some mumbling and unhappy grumbling, I complied and was immediately impressed by the results. You wouldn’t think a driver could make that much difference but it did make a huge difference, and I was finally able to back up all my machines successfully as of last night. Automatic backup is also working properly (the main reason I bought and cherish this box is that HP makes it easy to restore any PC for which a backup set exists on the MSS, including bare-metal recovery where required) at long last.

However, I observed this morning that the server was still falling over occasionally, not crashing per se, but dropping off the network and going incommunicado. A forced reboot proved necessary to regain access to the server, where the only odd behavior I could find in the System log was an occasional Master Browser election fight with other nodes on the network. Windows Home Server (and thus also, the MSS OS) is a modified form of Windows Server 2003, and as we all know, Windows Server machines ALWAYS take precedence over Windows client OSes when it comes to assuming the master browser role. In fact, each time a workstation would contest the master browser role with the MSS, it would shortly thereafter fall over/drop off the network.

Another call to HP Tech Support, and a new trouble ticket this time. Service agent Luke Fuller had me turn off UPnP on my router, and then helped me set up port forwarding to keep external Web server access and RDP from outside my network operational. I learned some more about the user interface for my DIR-655 router, and got all this set up and working properly. I’m not sure why turning off UPnP makes such a big difference, but the MSS has been running rock-solid ever since I made that change. In searching the Web on “drops off network UPnP” I just came across lots of cases where turning off UPnP on routers makes things work (but for some, not all, users) as discussed in this vistax64.com message thread. For contrast and irony, check out this MediaSmartHome.com posting “Recommended UPnP Routers for Easy Remote Access,” where my DIR-655 appears as the third item in that list. The UPnP part works for setting up remote access all right, but unless I disabled the UPnP capability, the MSS itself wouldn’t remain available on the network.

Go figure. Just for grins here’s a screencap of my new MSS running PerfectDisk 11 to clean up some seriously fragmented data disks. 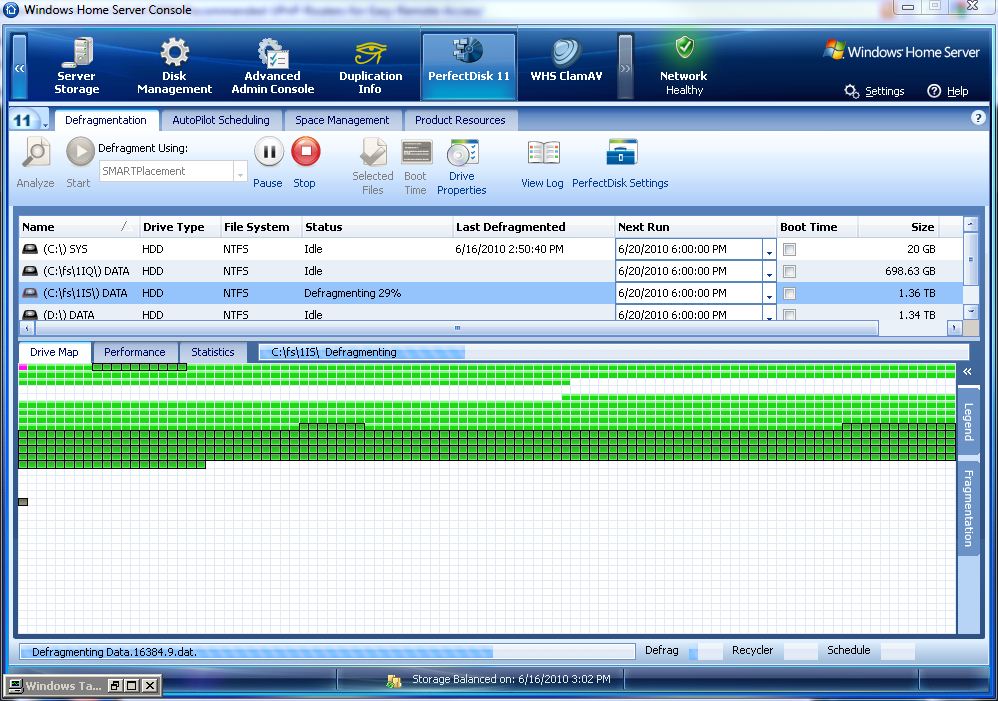 [Note added on 6/21/10: I had to return the MSS to HP over the weekend, because the unit continued to drop off the network intermittently without a definite pattern of causation, or logged errors to inform detailed diagnosis. Subsequent testing described in another blog for IT Career JumpStart explains why HP decided to label this unit “DOA,” and send me a brand-new warranty replacement. Sigh: It’s always something!]