Windows 8 logo faces Windows logos of the past

On Friday, Sam Moreau blogged about the new Windows 8 logo in Blogging Windows in a post entitled “Redesigning the Windows Logo.” The graphic at the head of my post comes from him, and lays out the prior Windows logos from 1.0 all the way through Windows 7 (below) against the brand-spanking new Windows 8 logo (above). According to Moreau the impetus in the redesign was to “…better reflect our Metro style design principles…” with “…an opportunity to reconnect with some of the powerful characteristics of previous incarnations.” Yeah, right!

I am glad to see this come out, not necessarily because I have strong feelings about the new logo one way or the other (though I am curious to see what kind of animation it will get, if any, during start-up and/or OS load), but because this pretty much makes Windows 8 the official product name for the upcoming release. That’s at least one thing solved and resolved about this thing that continues to generate interest, activity, and marketplace uncertainty for consumers and business users, not to mention the IT professionals who must support them.

Some commentators have described the new logo as an “inverted Finnish flag” by which they mean that the predominant color is switched from white to blue, making the central cross a white one against against a blue background, instead of the other way around. A quick gander at that country’s flag shows this comparison is apt. 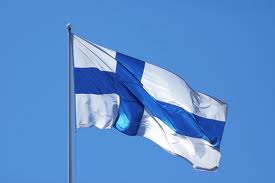 The Win8 logo switches background and cross colors from this flag

Ultimately the new design is meant to reimagine “…the Windows log as just that — a window.” Moreau also takes readers through Windows logos for all the previous versions (read bottom part of the first screencap in this post for a visual history, from left to right). I’m interested that MS took the time and energy to explain the logo’s evolution and changes to us, and to have their Principal Director of User Experience for Windows put his name to this effort. In particular I’m intrigued to see MS use the notion of “humble, yet confident” as a motivating feeling for the logo design. That’s something new for Microsoft, too, and it will be very interesting to see how it all plays out, and how it shows up in the upcoming customer preview released for Win8 due out on February 29th.

Kmsilver - 21 Feb 2012 12:42 PM
An "inverted Finnish flag"?! Oh, come on! So does this mean that Microsoft is planning on leaving Redmond and moving their world headquarters to Finland? Yeah, that's what it means! Or maybe it's really a crucifix and the subliminal message is that Microsoft is really a Christian missionary group trying to convert all non-Christians?! Watch out Jews... Microsoft is trying to convert you! (How silly can you be?) The logo is a window. That's all it is. A window. Get it? Window. Windows.
[-]

Ed Tittel - 21 Feb 2012 3:15 PM
Dear KMSilver: LOL! No big thing about the whole Finnish flag. Just a way to describe what it looks like quickly and succinctly. Gave me a few chuckles though. And yes, as the blog post title states, I get that "it's a window." --Ed--