Symantec recently announced general availability of its various Norton 2013 beta products, including Norton AntiVirus, Norton Internet Security, and Norton 360. Although they come only with two weeks (14 days) of free subscription support, these programs may be worth trying out for those running Windows 8 to get a sense of how third-party security software functions in a Windows 8 runtime environment.

I’d already been running NIS 2012 on a couple of Windows 8 Customer Preview machines with great success, so it was interesting to see what kinds of differences showed up between the current year’s version and the impending (beta) release. The interface has been spruced up and is a great deal more Windows 8 friendly, and it seems like the overall system footprint is lighter and speedier, though a full system scan still manages to consume appreciable levels of system resources. 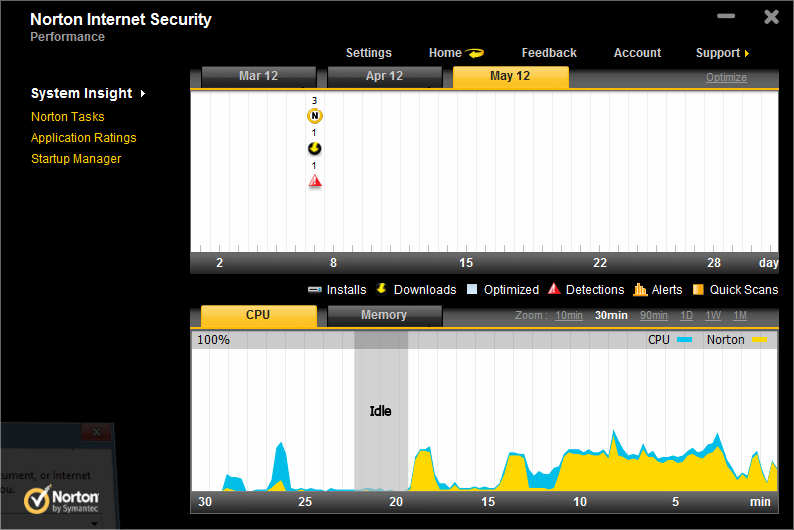 That said, the full system scan on my i7-2640M X220 T notebook, with just under 40 GB of stuff on the C: drive, took just over 20 minutes to complete and caused no perceptible system drag as I opened IE windows, and ran various other applications while the scan was underway (Gabe Topala’s excellent System Information For Windows, Windows Explorer, the Snipping Tool, and so forth).

But so far, I can’t get Norton Management on my Windows 7 production machine running NIS 2012 to “see” the test machine running beta NIS 2013, or vice-versa. I may have to do some additional futzing around to get this to work. But from what I can see when logged into my Norton Account online, it looks like there’s some kind of deliberate isolation of the beta from production versions (later note: it uses a completely different account login, so there is a deliberate separation between beta and production accounts). I’m going to keep exploring the beta and will report back further as and when I learn anything interesting. But so far, it seems completely on par with the production 2012 version, if not slightly less intrusive (a pretty nice accomplishment, considering what a great job Symantec has already done in reducing Norton’s once-substantial footprint to something less obnoxious in the past 3-4 years).