Last February, in getting ready to work on a Windows 8 book — now abandoned, alas, in favor of other work — I purchased a couple of Lenovo notebook PCs. My X220 Tablet has become my go-to touchscreen Windows 8 test PC, and my T520 notebook has proved itself to be a solid and dependable traveling PC as well. In learning all about my Lenovo units, I’ve become familiar with a class of compact solid state SATA drives that use a special Mini-SATA or mSATA connector, not least because both of these notebooks will accommodate an mSATA SSD in the same slot into which you might otherwise plug a WLAN card. 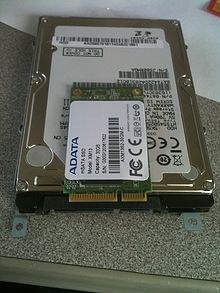 Naked RAM: mSATA skips the housing around flash chips inside a 2.5in drive

mSATA is essentially the same form factor as mini-PCIe (PCI Express Mini Card interface) and is becoming increasingly popular for SSDs. Right now, all of the major vendors — including Intel, Samsung, OCZ, SanDisk, ADATA, Transcend, SuperTalent, and so forth — offer mSATA SSDs in capacities from 20 GB to as large as 256 GB. They tend to be more expensive than their 2.5″ packaged counterparts, and some care must be exercised in picking units compatible with the chosen host PC. But I’ve had good luck with both of my Lenovo units in using an 80 GB Intel 310 mSATA drive, even if one must perform a clean install of the OS to get the machine to recognize the mSATA SSD as the boot drive.

For notebook PCs, the great thing about mSATA is that, when available, it provides an extra drive slot that’s perfect for a smaller (60-80 GB for a PC with 4-6 GB RAM; 120 GB or larger for a PC with 8 GB RAM or more) boot drive, which leaves at least one slot open for  a conventional 2.5″ hard disk or SSD, depending on performance needs and budgetary constraints. What I really like about my T520 Lenovo notebook is that I can (and did) buy a $40 swap out, snap-in replacement for the optical drive module that lets me add another hard disk, for a total of 3 drives in that machine. Right now, I’ve got two 750 GB 7,200 RPM drives for storage, and a snappy 80 GB mSATA boot drive, for a pretty winning combination of speed and storage capacity.

But here’s another interesting news flash to consider as well: a growing number of motherboard makers — including at least Asus, Intel, Jetway, Gigabyte, and Zotac (see this Google search) — are selling modern mobos (mostly socket LGA1155) with built-in mSATA interfaces. These are smart enough to recognize mSATA devices in UEFI or BIOS, and to propel them to the top of the boot hierarchy by default. I’m starting to think that I might know what kind of motherboard I’ll be buying for my next desktop build, in fact…