One of the interesting and easily overlooked consequences to using SSDs on PCs at a time when RAM is also incredibly cheap is that you have to take the Windows pagefile into account (and a hibernation file, if you use that feature on your systems) when sizing such drives. Though SSDs are getting cheaper all the same — Tiger Direct had a one-day special for a 128 GB OCZ Vertex-3 at $60.00 earlier this week, for example — you want a system/boot drive with at least 25% free space (and twice that is better) to give your OS room to breathe (and your SSD to move things around as it sometimes must when writing data). All this is by way of explaining the “one small change” to my production desktop PC, which I upgraded from 32- to 64-bit Windows Professional earlier this summer, when I also bumped the memory from 4 to 24 GB. Once I’d made all those changes, I quickly realized that the original drive wasn’t big enough to accommodate everything I needed it to because my pagefile jumped in size from 4 to 24 GB, and my hibernation file from 3 GB to 18 GB (a net gain of 35 GB). In short, I needed more space!

The previous drive was a 2-year-old OCZ Vertex 2 nominal 128 GB (119 GB reported in Explorer) which I replaced with an Intel 520 SSD nominal 180 GB (167 GB reported in Explorer). This took me from a situation where I had 20-25% free space on the drive most of the time, to a situation where I am looking at the properties window that shows almost 56% free space right now. 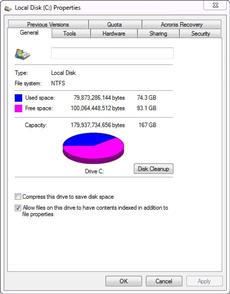 A fish can breathe out here!

But getting from the old drive to the new drive proved to be more challenging than I had originally thought. It started well, as I put my $20 software program to work: Paragon’s excellent “Migrate OS to SSD” tool worked like a charm (and is a great buy, because as long as you uninstall it from one machine, you can then legally use it on another, and this is a program that doesn’t need to take up permanent residence on most PCs). Where things got dicey was when I opened the PC case (a very nice but now somewhat crowded Antec 902 tower case) and realized that I was going to have to remove both drive cages to make the swap work. This meant unhooking the Molex connectors for each cage’s fan, disconnecting all three SATA drives inside the case, removing the 2.5-3.5″ drive tray for the SSD to replace the OCZ with the Intel unit, and then putting everything back together again. Plus, there was a bunch of miscellaneous dust removal needed throughout the whole ordeal.

I’ve got two monitors hooked up to my case with DVI connectors, an audio cable, an RJ-45 for GbE, four USB cables (keyboard, mouse, and two USB hubs, plus two eSATA connectors for my primary data and backup drives (they’re easier to relocate to other machines that way when needs must). It took me about 10 minutes to get everything disassembled at which point I confronted the rat’s nest of cables in the area between where the PSU cables emerge, the on-board SATA II and III ports, and the power and SATA connectors on the backs of my SSD and the two internal drives in my case). Yesterday’s temps got up to 104° F and my office is on the end of the air conditioning chain from the condenser and main air moving unit upstairs  in my house, so it was probably 85° F in my office in the late afternoon when I tackled this mess. I got everything taken apart, with the old drive old and the new drive into the drive cage, when I realized I was growing dangerously crabby about the work I had to do. Fortunately, family responsibilities intervened (but not before I found myself apologizing for barking at my wife, Dina, for grousing at her for no good reason at all) and we all went out for dinner to a nearby Chinese restaurant instead. Once there, a powerful combination of Japanese beer, wonton soup, triple delight, sauteed green beans, and fried rice soon restored my sense of humor and equanimity.

I returned to my office at about 7:30 this morning, and started the process of reassembly. I had to re-route the SATA cable from its former built-in ASUS SATA II (3 Gbps) port to one of two other Marvell 9128 SATA III (6 Gbps) ports on the motherboard, so as to take advantage of the Intel 520 SSD’s support for SATA III. I also had to blow the accumulated dust out of the case — it’s amazing how much can pile up, even though I cleaned the unit thoroughly in June when I did the 32- to 64-bit upgrade and added in the new RAM — which necessitated numerous trips outside with case or components and a can of compressed air in hand. By 8:30 AM, I had everything back together and started fiddling with the BIOS to get the system working again.

It took me four reboots to get everything working along with some consultation of the motherboard manual and some good, old-fashioned trial-and-error. I first had to re-establish the boot order for the PC, so the Intel 520 would act as the boot drive for the system. Then, I learned that the Marvell controller has a separate setting for AHCI access (it’s in the Integrated Devices panel, rather than consequent to the same setting on the Initial Setup panel). I actually had to reset the BIOS one extra time, because the first boot recognized the Intel as an IDE drive rather than an AHCI drive, and this caused the settings for the other SATA drives to be reset to IDE as well. By the third boot I had everybody on AHCI and things working properly, so I rebooted a fourth time to boost the CPU clock from its 2.8 GHz default to a modest 10 percent overclock of 3.15 GHz with a similar boost to memory clock rates as well.

So finally, everything’s working again, the system is running (and booting and shutting down) noticeably faster, and another adventure in PC upgrade and twiddling has come to a happy and fortunate close. I’d wondered if I was going to need to head to Fry’s  to pick up some SATA III/6 Gbps drive-to-SATA-port cables, but so far everything seems to be working OK. I’ll do some benchmarking over the weekend with ATTO, HD Tune, and CrystalDiskMark and see if I’m in the ballpark I should be for that oh-so-speedy drive. I’m also trying to figure out why the Intel SSD Toolbox won’t recognize the 520 drive like an earlier incarnation did so well with my X-25M drive: although CrystalDisk and the BIOS say SMART is turned on for the drive, the toolbox says otherwise, and won’t provide drive details or allow me to check to see if my firmware needs an upgrade. Drat! It’s always something… In this case, I’m guessing it’s some issue with the Marvell 9128 SATA III/RAID controller that I switched over to so as to take advantage of the higher data transfer speeds it makes available.