In trolling TenForums.com over the weekend, I came across a reference to a another free Registry Cleaner for Windows. It’s a SourceForge project called the “Little Registry Cleaner” (LRC). Like all SourceForge projects, it’s free under the GNU General Public License. It doesn’t do a half-bad job, either. Later, I’ll compare it to my usual go-t0 tool for registry clean-up. That is Piriform CCleaner (also freeware , with file clean-up and other tools, too).  Working with LRC got me to thinking about the real utility of such programs, or “Registry Cleaner Pros & Cons.” 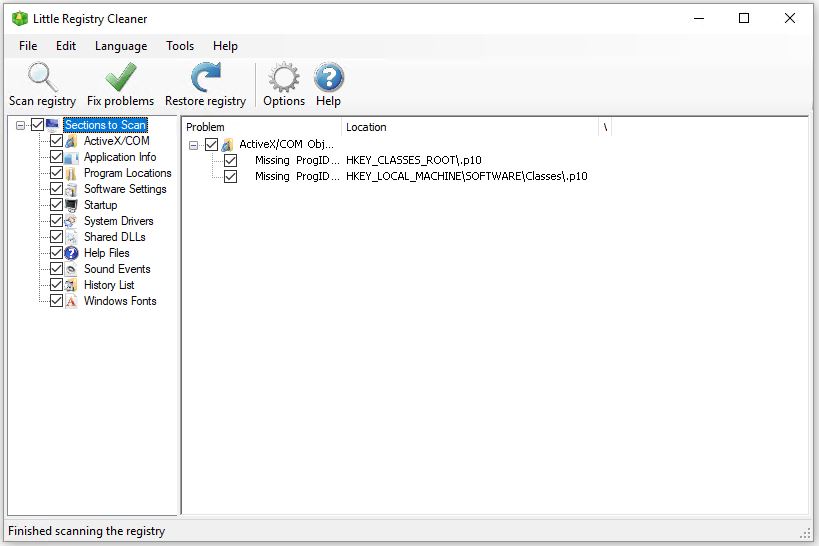 Not much left to see, after LRC does its thing. Then it hit me: the GUI is nearly identical to WUMT. They must share the same GUI kit!

If you Google “registry cleaners worthwhile” or “value of registry cleaners” you’ll find plenty of heated discussion and controversy. Registry cleaners like CCleaner or LRC seek out and offer to delete orphaned or obsolete registry entries. These entries refer to software, objects, and other “system stuff” not currently in use, or that originates from software no longer present on the system. Thus, it actually makes little difference whether those registry entries are present or absent. They don’t do anything, and they don’t take up that much space, either.

On the other hand, messing with the registry can and will occasionally damage Windows. Such damage can be minor (GUI acts or looks funny, certain apps or applications don’t run or run slowly, and so forth). But when major registry damage occurs, Windows can malfunction: the system won’t boot or run. That’s why many experts say that such cleaners probably aren’t necessary and should be avoided. Primarily, that’s because the harm they can do is more trouble than the good services they might perform is worth.

I’m in the same camp as long-time PC World expert Lincoln Spector myself. He wrote a nicely-nuanced story on this subject in 2010 entitled “Are Registry Cleaners Worth It?” Like me, he finds some of those tools (including CCleaner) to be mostly benign and unlikely to cause trouble. He doesn’t mention LRC, but my own recent experience puts it in the same general cubbyhole as CCleaner, FWIW. If you’re inclined to perform occasional registry cleanups, and take necessary precautions before cleaning (make a registry backup), you should find either or both of these tools useful.

As you’d hope from a single-function, more specialized tool, LRC generally finds and cleans more stuff than does the CCleaner Registry Cleaner sub-system. On average, LRC seemed to find somewhere between 25 and 40% more registry entries in need of clean-up than did its CCleaner counterpart. I couldn’t detect any negative impact from either tool on any of the PCs on which I performed a quick comparison test.

Feel free to try them out, and to make (occasional) use of them as you see fit. Just remember to back up your registry first. Note: CCleaner prompts you back up your registry automatically but forces you to rely on import operations in regedit to restore that backup. OTOH, LRC handles this by making a restore point before it does anything to your system, and includes a Registry Restore button on its top-line command bar in the program (see preceding screenshot). I give both tools equal points, but will probably stick with CCleaner because it’s good enough for my needs, and includes a pretty peachy file clean-up facility along with registry cleanup, a decent startup manager and uninstall utility, and more. For those with OCD tendencies who want their registries squeaky-clean, LRC is probably the better choice.