An interesting story appeared in Extreme Tech earlier this week. Entitled “The fanless heatsink: Silent, dust-immune, and almost ready for prime time,” it digs into a recent invention from the eggheads at Sandia National Laboratories called the Sandia Cooler heatsink. The reason why I designated the fanless heatsink terminology as “so-called” in my blog title is because calling this technology fanless is something of a misnomer. Actually, the heatsink’s heat dissipator IS a fan, so no additional fan is needed to provide cooling for this particular device, as shown in the photo below (reproduced from the Extreme Tech story cited above): 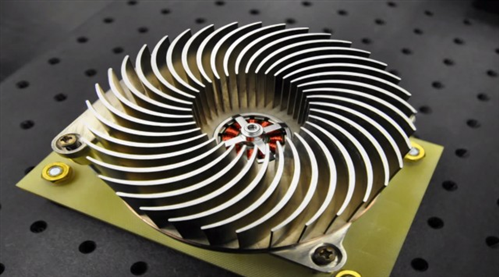 According to the Extreme Tech story, there are lots of interesting wrinkles to this invention, which sounds pretty much like a “gotta-have-it-yesterday” PC technology to me. First,  it’s reportedly 30 times more efficient than current heatsinks. Second, it uses a “cast metal impeller” that floats 0.03 mm above a metal heat pipe spreader, and is powered by a brushless DC motor integrated into the unit itself. Third, the impeller is extremely quiet (no sound measurements provided, but even the quietest of fan-based coolers emit at least 30 dBA, so I’m guessing it’s in the lower 20s if not quieter than that — basically inaudible, especially in typical household or office environments which usually feature ambient noise levels in the 35-45 dBA range). There’s a video in the linked story (above) that shows how quiet it is, and that’s pretty quiet indeed. Fourth, the impeller has been designed to resist dust build-up owing to a constant rotation at 2000+ RPM, and use of centrifugal force to drive dust out of the air gap between the heatsink (the impeller) and the heat spreader (the metal heat pipe spreader attached to the processor package). Fourth, the Sandia folks estimate that “if every conventional heatsink in the US was replaced with a Sandia Cooler, the country would use 7% less electricity.”

OK, I’m sold, but apparently it’s going to be a while before this technology makes it into a commercial cooling product. According to the story, a company has licensed the technology for PC cooling, but that company hasn’t been identified nor any such products announced. Rats! I was hoping to rush right out and buy some immediately. Let’s hope it doesn’t take toooooooooo long to come to commercial fruition. Gotta have it!!!