At this very moment, I’m about 80 percent done with my first of four planned downloads for Windows 7 from MSDN. Alas, my Vista box did go to sleep last night despite the ongoing download, so it didn’t resume until this morning to finish up. Now I know to turn off sleep mode on this machine until the rest of those downloads complete, and because the 32-bit version of Ultimate is last on my list (wouldn’t you know it) I probably won’t get that version until later today or perhaps even tomorrow. It’s the one I need to try out the upgrade on my balky and temperamental production desktop machine. Why didn’t I put it first on the list?  Oh yeah: because it’s lower down on the MSDN download page. Sometimes I wonder…

Here’s a snapshot of my current progress: 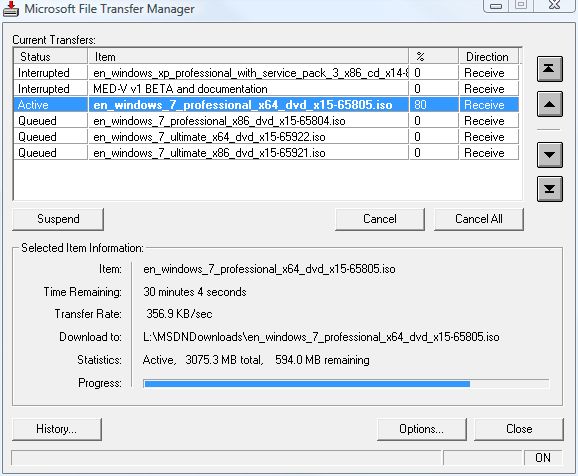 Still dragging on toward completion

There is some good news on the download front this morning, however: my transfer rate is bouncing between 250 KBps and as high as 450 KBps. That sure beats the sub-100 KBps rates that prevailed yesterday, and means I might actually finish all three remaining downloads in far less time than the first one took to complete. At least, I certainly hope that’s the case! As I post this blog, I’ve already jumped to 87 percent complete on the first item, so there may indeed be cause for optimism.

[Update at 11:07 PM: broke the Akamai connection to reboot after updating to Logitech SetPoint 4.80 drivers just released on 8/5. Bingo! A new connection is running consistently at 400+ KBps. Maybe I’ll get this downloaded before I crash tonight after all…]