The long tail is a concept popularized in the early 2000s by writer Chris Anderson, who first used the term in an eponymous Wired magazine story. Simply put, the long tail concentrates on the tail end of certain statistical distributions (such as the Zipf, power law, and Pareto distributions). This might sound a bit ivory tower. But it explains how large populations shake out into small clusters of elements at their tail ends. Companies grab this tail to expand their ability to sell more into a market. How Windows 10 PC’s organize themselves by the devices and chips they contain is similar. My growing belief is that for Microsoft, the long Win10 tail carries a nasty barb or two. In fact, it’s stinging them soundly right now. 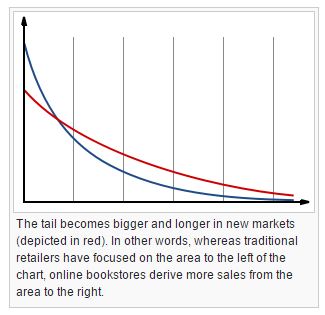 The distribution of who’s using what kind of PC hardware also fits this curve, and things happening to users on the long tail are biting Microsoft these days.
[Source: Wikipedia]

Why See Barbs on the Long Win10 Tail Anyway?

I’ve been looking for a way to explain numbers of unhappy Windows 10 users who pop up on public forums such as answers.microsoft.com, and TenForums.com. Many of these users report out-and-out weird problems that many users will never experience for themselves. I’ve been following this traffic for six-plus-months now. I’ve seen credible reports of heart-wrenching, hair-pulling issues with Windows update, File Explorer, OS installation, and more. In digging into these issues and reported solutions, device drivers seem involved in at least half of them. As for the other half, “Windows registry oddities” account for many of those cases.

What does this mean? Windows 10 runs on 400 million-plus PCs, tablets, notebooks, and devices. Its long tail includes configurations with strange, peculiar, uncommon or outdated devices. I believe some unhappy and vocal users on this long tail are falling victim to gaps in a well-established and -oiled device support system . Indeed, it covers the vast majority, and covers it reasonably well. I’ve been mucking around with device drivers since the mid-to-late 1990s (about 20 years or so). Along the way, I’ve learned what hoops one must jump through, and the sources one must mine, to fix driver problems. I don’t think the same is true for many Windows 10 end users. What we’re seeing recently with complaints and decisions to roll back to Windows 7, 8, or 8.1 is this: that hardware works fine on older OSes, but not on Windows 10.

Taking the Sting Out of the Long Win10 Tail

Intractable driver problems are where barbs on the long Win10 tail start to sting. I’m not sure that it’s entirely Microsoft’s fault. Nor is it even the fault of the vendors who built the responsible devices and who typically write the drivers. It’s just that the whole distribution is big enough that certain parts of the long tail will have problems. And some of those problems will never be fixed. That’s because vendors don’t support Windows 10 on some device, or the driver has a bug when used with Windows 10 but not on older OSes.

Is this Microsoft’s fault? Probably not. But is it their cross to bear? Most assuredly! I’d urge them and the various communities that serve Windows 10 users to invest in more education to explain such things. They should also describe potential forms for relief. This is a rough patch on the PC landscape, but one that all need navigate. The long Win10 tail may never lose its barbs, but education may help them lose their sting.