OK, so now we know more about the Microsoft Surface x86 models, the up-market, Windows 8 Pro-based big brothers to those ARM-based Surface platforms running Windows 8 RT. Here’s a quick recap of the specifications, straight from MS: 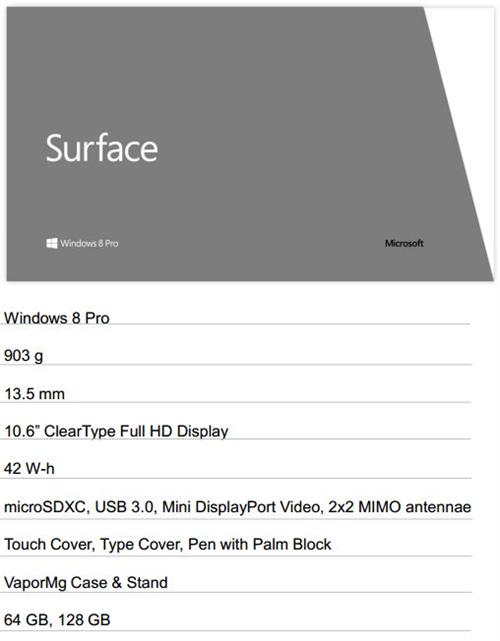 What’s missing from this description is the RAM (4 GB DDR3 soldered in, can’t find out if an 8 GB model is planned or available), the CPU (an ultra-low voltage i5 dual core Ivy Bridge CPU, probably an i5-3427U or i5-3317U, much like the models found in current MacBook Air offerings), and the display resolution (a full 1920 x 1080 vs. 1366 x 768 for the RT model). The 64 GB model bears an $899 MSRP and the 128 GB model a $999 MSRP (I’m guessing this means no 8 GB RAM-equipped models just yet). No covers are included in this pricing, either, so you’ll have to pay $99 for the ultra-slim Touch or $120 or so for the thicker but more “keyboardy” Type covers in addition. Nothing is known about battery life just yet, but the 42 W-h battery is slightly bigger than the 35 W-h battery included in MacBook Air 11″ and somewhat smaller than the 50 W-h battery in its 13″ counterpart, both of which enjoy excellent battery life. Another potential gotcha: the amount of SSD storage space left over after the OS and pre-loads are considered (there’s been a huge flap about the Samsung ATIV tablet lately, which comes with about half of the 64 GB SSD model’s space already gone when it reaches users’ hands).

What’s wrong with this picture? Lots of pundits, analysts, and consumers are voicing displeasure with the pricing of these units. But they’re $100 less than equivalent MacBook Air 11″ models with the same SSD sizes and the 1.7 GHz OEM CPU models (probably identical to those in the x86 Surface tablets, though I can’t find details on CPU makes and models just yet). Given that the keyboard/cover brings price, weight, and functionality into complete parity with MacBook Air 11″ models, another way to interpret this strategy may be as Microsoft’s confident assertion that “our tablets are as good as the MacBook Air 11-inch models.”

Nevertheless, there’s a lot of whining and moaning on the Web about the x86 Surface offerings. Key complaints include:

1. Pricing is too high. The RT model needs to be under $300 for RT to compete with Kindle/Nook/Android tablets. The x86 model needs to be under $700 to compete with iPad and 10″ Android tablets. Valid points from a marketing perspective, but I’m not sure I agree — at least for the x86 platform — because it can run the whole gamut of Windows desktop applications.
2. Battery life is too short. Full-day battery life is needed (like the iPad offers) to make a tablet truly use-worthy. Jury’s still out on this one, and neither 11″  (5 hours) nor 13″ (7 hours) MacBook Air models make the 8-plus hours needed to reach this goal, either. We’ll get a better read on this when and as reviewers can actually test these platforms.
3. The Windows 8 user experience sucks. I’m not sure what this has to do with Surface x86 tablets, but several disappointed pundits have voiced this concern as dooming the Surface in any case. To these curmudgeons I say: learn how to make Win8 stand up and bark on its own, or install Start8, Classic Shell, or any of a number of other good Start menu stand-ins.

As for myself, I’m inclined to reserve judgement until I have the chance to work and play with one of these units for a while. I want to understand how well it works as a pure tablet, especially with desktop apps (I still haven’t found too many compelling Windows Store apps to keep me in the modern UI for long on Windows 8), how long the battery lasts, how well it performs and behaves, what wireless connectivity is like, and a great deal more before I can pronounce it either a success or a failure. It should be interesting to find out where the chips will fall, though, and I do like the size, weight, form factor, and screen resolution. Stay tuned, and I’ll report further as I learn more…