Although Microsoft released Windows Vista SP2 to manufacturing (RTM) on April 29, and to MSDN and TechNet subscribers in early May, it’s still not available for download elsewhere. As of this morning, neither the Microsoft Download Center nor Windows Update shows hide nor hair for SP2 anywhere. On its Microsoft Update Product Team Blog for May 20 we finally got some news about what’s going on in a posting entitled “Get ready for Vista and Win2k8 SP2.”

According to the MU Team, Vista (and Windows Server 2008, which share a common code base) SP2 “…will be available in the coming weeks on the Download Center (DLC), and also through Windows Update and WSUS.” But according to Nick Clark, by way of Mary Jo Foley, automatic updates for Vista SP2 won’t start getting pushed until June 30, 2009.

Why such a long delay before automatic push? Enterprise users should know this answer better than anybody else. Rolling out any service pack, including SP2, takes prior testing and may involve possible remediation or even a postpone/no-go decision, which in turn takes time. This approach also leaves the door open for some organizations to use the Microsoft Service Pack Blocking Tool to prevent the SP2 update from being applied prematurely.

As for me, I started testing various SP2 versions (including a slipstreamed install for both x86 and x64 versions) a couple of months ago. I liked what I found and saw enough to switch my production units over to SP2 in the last week (thanks to my MSDN subscription), and believe that many others will want to switch over to SP2 as time and opportunity permit. In fact…knock on wood as I write this…I haven’t had a single stability problem with my production machines since the day after installing that service pack (I did, however, have problem during the reboot phase of the install on one of those machines and got tagged in Reliability Monitor for an unexpected shutdown when I had to hit the reset button to get the SP2 install to continue through the reboot phase successfully). Other than that, it’s been surprisingly smooth sailing on the sometimes choppy Vista waters ever since! Look at the “monotonically increasing trend line” in Reliability Monitor since 5/14 (the day after my install on the problem machine). 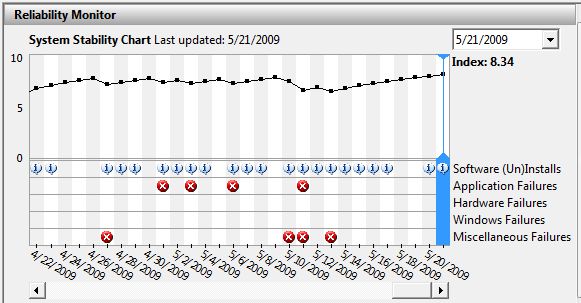 Starting the day after the install (5/14) an unbroken upward trend.