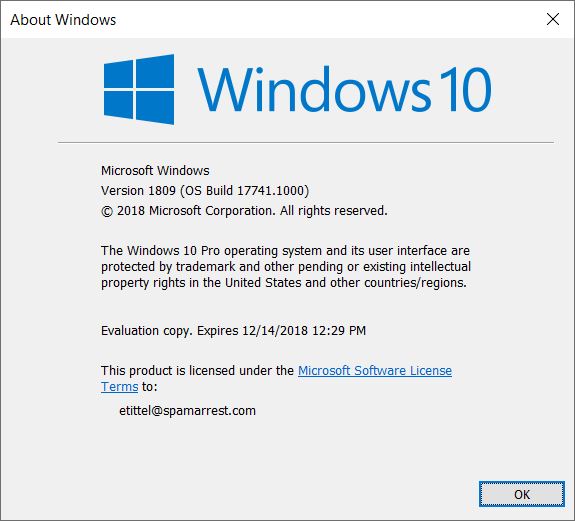 With less than two weeks left in August, it certainly seems possible that 1809 actually *could* appear in September. After all, 1809 means “the ninth month of 2018,” which indeed falls next month. But the actual release date will depend on bugs in need of squashing, fixing, or otherwise addressing when a golden release — of which 17741 is merely the first possible such — hits the Insider population.

But hey: at least we now have official confirmation from Microsoft that the next version number, as promised, will indeed be 1809. That’s something, right? The next versions of Windows 10 will switch away from two-digit month numbers to H1 for the first half of the year, and H1 for the second half. That gives MS a LOT more latitude to make sure the next release is rock-solid before making it public. After all, 19H1 (as the upcoming new nomenclature should have it) isn’t over until June 30, 2019!

I’m totally in favor of focusing on stability and functionality over hitting an arbitrary release date. Maybe MS is giving itself more wiggle room with the new naming scheme. But as long as they use it to make doubly darn sure that Windows 10 Feature Upgrades are rock-solid and ready for prime time, I’m all for it. We’ll see how that works out sometime in the second quarter of 2019. Stay tuned.