In switching my test and production PCs over from Vista (or creating dual boot Vista/Win7 or XP-SP3/Win7 setups), I’ve observed that while Windows 7 does a very good job of identifying most hardware and then loading the proper driver, I’ve also recently observed that its accuracy is less than perfect. This can lead to interesting problems and apparent stability issues, so it’s a possible culprit worth pondering when otherwise rock-solid Win7 installations start showing signs of driver-related instability.

Case in point: My Dell All-in-One (AIO) 968 inkjet printer. As I documented in a ViztaView blog a little over a year ago, that OS also misidentified this printer as a Dell AIO 968 XPS printer. XPS is the Microsoft XML Paper specification created as a platform independent document exchange format, and essentially forces the printer driver to convert all other print input forms into XPS prior to allowing the printer to output any files deposited into the AIO 968’s print queue. As it turns out, Win7 also falls prey to the same misidentification, which produces a slew of “Print Filter Pipeline Host” errors when the whatever-format-to-XPS conversion runs into trouble (which it does all the time, if my experience with this particular device misidentification is any guide). Thus, if you look at this Reliability Monitor display for 10/23/2009, you’ll see 6 instances of the “Print Filter Pipeline Host” “stopped working” errors on that day, as I printed a bunch of stuff (coloring pages for my son, actually). 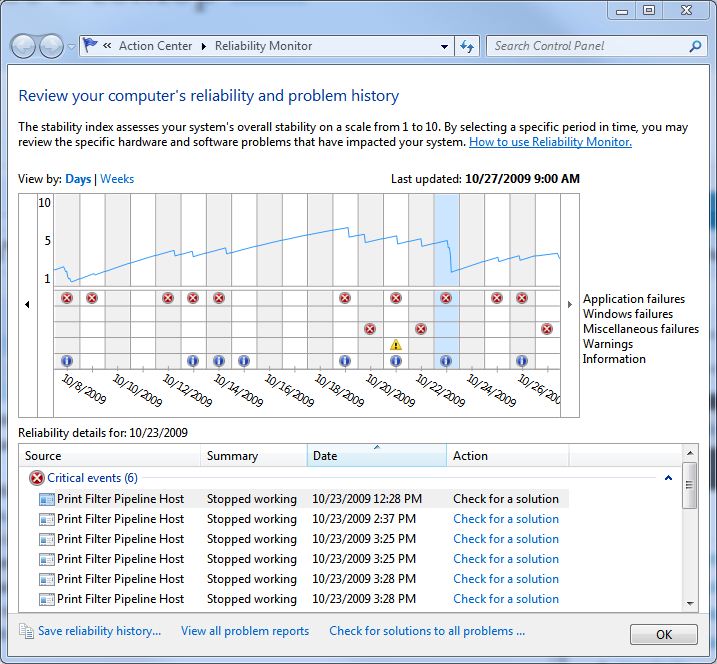 Look at all the print filter pipeline errors!

When Dell released a new Windows 7 driver for this printer on October 5, I happily installed it and kept my nose to the grindstone without really checking my work. Had I done so, I would have noticed that the device had been incorrectly identified as a “Dell 968 AIO XPS Printer” rather than a “Dell 968 AIO Printer.” Because the former always invokes XPS conversion as part of the print process, and that process throws lots of errors — particularly when printing Web pages — I suddenly found myself back in the swamp with those “Print Filter Pipeline Host” errors once again.

It wasn’t until I went into Devices and Printers, right-clicked the Dell 968 entry and forced it to be identified as the right printer that I got things working. Simply uninstalling the driver and letting Win7 re-detect the hardware did no good whatsoever, because the OS misidentified this device as a “Dell 968 AIO XPS Printer” all over again, instead of the plain-vanilla version of the device. A quick manual override fixed this, and now things are working fine. (Hint: click the Set as default pop-up menu entry, and both printers will appear, so you can select which one to set as the default. That does the trick!)

All I need to do in future is to remember to make this manual change, if I ever need to re-detect that hardware in Windows 7 again. Just another little Windows eccentricity to add to my list of things to keep track of!

Ed Tittel - 2 Feb 2010 12:44 AM
Dear Raymundo: I'm in Belgium, working on a notebook, and don't have ready access to Windows 7 and the printer in question (I haven't upgraded this notebook to Windows 7 yet for production purposes, though I plan to do so soon). This situation means I can't give you precise step-by-step instructions right now. You can, however, change the default printer in Printers and Devices from "Dell AIO 968 XPS" (which is what comes up by default) to "Dell AIO 968" This fixed all my problems for me, and will probably do so for you. You can leave the Dell AIO 968 XPS driver installed (I couldn't actually figure out how to make it go away). HTH, --Ed--