It’s a big day for MS news today, what with the Windows 10 Customer Preview dog-and-pony show today at Global HQ in Redmond. There’s all kinds of interesting news on that front, but the item that’s undoubtedly of greatest interest is also recounted in a Blogging Windows post from Terry Myerson that went public this morning before that show got on the road (“The next generation of Windows: Windows 10“).

Here’s what he said therein: “We announced that free upgrade for Windows 10 will be made available to customers running Windows 7, Windows 8.1, and Windows Phone 8.1 who upgrade in the first year after launch.*” And here’s the asterisk disclaimer text: “*Hardware and software requirements apply. No additional charge. Feature availability may vary by device. Some editions excluded. More details at http://www.windows.com.”

Courtesy of Paul Thurrott who posted a photo of this wall banner from the event, I even got a cheesmo version of the new Windows 10 logo:

The real thing will no doubt be properly proportioned and color balanced, but this gives you the idea…

I think this is a long-overdue and very wise move on Microsoft’s part, which can look forward to moving a good portion of the non-business side of the user base to Windows 10 fairly soon after GA, and which also just gave businesses a pretty darn compelling reason to consider upgrading sooner rather than later, in the wake of the upcoming Windows 10 release. I’ll definitely be taking advantage of this for all of my PCs, and I’m sure lots of others will at least think about it, if not do it, within 12 months of GA just to exercise this offer. 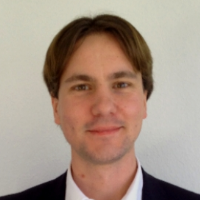 Wolfgang Dietl - 21 Jan 2015 6:09 PM
Well I'm not quite sure what the term 'in the first year' and 'windows as a service' really means...would you have to pay monthly\yearly subscription fees for certain features? I'm definetely waiting for more details...but I'm looking forward to the new build!
[-]

As far as I can tell, the MS remarks means those who upgrade to Win10 from 7 or 8.1 will get continuing service at no charge for the remaining life of each device so upgraded. I don't think this means subscription fees for those devices, but who know about other or new devices? You're right to say we must still wait and see to understand what's going on more completely, but I am encouraged that MS is smart enough to realize that free upgrades will help improve adoption and use of Win10.

Wolfgang:
Here's a story from WinBeta.org that clarifies (and confirms) my previous comment: http://www.winbeta.org/news/microsoft-windows-10-free-lifetime-device-after-initial-upgrade-no-yearly-fee-upgraders

Wolfgang Dietl - 22 Jan 2015 9:39 AM
Hi Ed,
was digging into this myself in the meantime and figured it out already, but thanks for the clarification and the link!
But the question somehow still remains. I can´t imagine Microsoft to just give away its new "Windows service"...we all know Windows with Bing and the Office apps for Android/iOS that after the beta will only really work with a Office 365 subscription....so now I´m really curious how they are going to build a revenue stream out of Windows 10...what do you tihnk, how are they going to monetize Windows 10 after all?
[-]

Cyberfort - 22 Jan 2015 11:33 AM
"The lifetime of the device" is the phrase that interests me. Who decides this lifetime? I've several very high spec boxes, currently running win7ult, they could be expected To handle anything thrown at them for 5-10 years. Will I receive constant support during that period? And will they be stuck on Win10 LTS while the rest of the world moves on to Win11,12...? It could be a game changer, but as already has been observed, we'll have to wait for the fine print.
[-]

Wolfgang Dietl - 22 Jan 2015 11:49 AM
Yeah, stumbled upon that, too...maybe it also has to do something with support services, or hardware certifications...but that all would exclude old machines and therefore can´t be the right answer to that one...
[-]

The devil is in the details, and MS isn't ready to share all of them with us yet. Plenty of time before we have to burn -- or cross -- this bridge.

BuckRodgers - 23 Jan 2015 4:15 AM
Yes the devil is always in the fine print and what has MS in store for the unwary.  As an example apart from any possible charges after that "first year period", what ever that will really means, what about programs already installed on existing MS OSs, will they be left alone, as installed, or would we be forced to updated such programs, for example, Office 2007?  Be very careful, all is not at times better and if you are happy using Win 7 or Win 8.1 carry on until you really see something in Win10 that is an advantage for YOU, not MS!  It is not always about keeping up with the Jones'
[-]

Dear Mr. Rodgers:
You make some very good points, but we still have no choice but to wait and see anyway. Most of the smart people watching for the finalization of the General Availability (GA) date for Win10 seem to believe it won't ship until September or October of 2015. Still plenty of time for more details to emerge, to be clarified, and to be "cussed and discussed" as we say down here in Texas.

Ed Tittel - 23 Jan 2015 11:39 AM
Here's an interesting article on the focus for much concern about the one year of free upgrades, and what comes after that, from Alisair Kingsley-Hughes over at ZDnet. Check it out: "Windows as a Service: The pros and cons" (http://www.zdnet.com/article/windows-as-a-service-the-pros-and-cons/?tag=nl.e539&s_cid=e539&ttag=e539&ftag=TRE17cfd61)