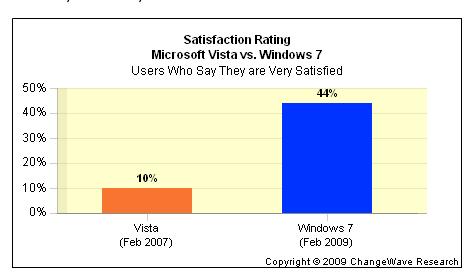 According to the same survey, the reasons for the difference in opinion include improvements in performance and resource consumption, ease of installation, plus improved functionality and usability. Thus, it should come as no suprise that Windows 7 is also emerging as something of a Vista killer, in the sense that more corporate Windows users are abandoning their plans to migrate to Vista in favor of waiting for Windows 7 to become available. More than half of survey respondents (53%) indicated they would skip Vista, while only 15% indicated they would proceed with planned Vista rollouts in any case. Likewise 14% of respondents also indicated their organizations would defer Windows PC and server purchases to wait for Windows 7 to become publicly available.

It will be interesting to see if these numbers hold up when ordinary users get their hands on Windows 7 after the beta period ends, and the commercial version becomes available. Based on my own experience with that beta, though, I suspect that even garden-variety Windows users will find a lot to like about this latest version, particularly those looking for something a bit more attractive and user-friendly for netbook/notebook use. To me this also adds more urgency to the big question about Windows 7 — namely, whether it will retain its current Q1 2010 release date, or if market forces and momentum can push that date forward into Q4 2009. I have to guess that Microsoft and the PC makers will find some merit in going public sooner rather than later simply because of its potential impact on and benefit to holiday PC sales.