Now that I’ve gotten Windows 7 (the latest beta build: 7057) up and running on a couple of computers, I understand most of the recent hoopla it’s garnered a whole lot better. It is indeed quick and easy to install: under half an hour in all cases, working from an ISO download I burned to DVD after downloading it from MSDN. Windows 7 does consume fewer resources and run faster than Vista, just like other recent reports indicate. Also, it does a decent to stellar job of recognizing hardware and getting itself installed with a minimum of user input and activity involved. I selected a language, confirmed my time zone and locale, provided a key, and indicated I was using a home network. That was the entire extent of my interaction with the PCs upon which I installed this software (one notebook, one desktop, just to get the full flavor of Win7 in my test environment).

I also now understand that Windows 7 is a whole lot more like Vista than it is unlike Vista, though it does look completely different, and organize the desktop as well as access to programs, services, and so forth a bit differently. It worked perfectly with all the software I threw at it with only two exceptions: it wouldn’t run PerfectDisk 10 for defrag (analyzing a drive produced the generic catchall “Error 0” notification) nor would it run Unknown Devices 1.2 (when run on Vista, this program reports “I don’t know what OS this is exactly, so I guessed where the PnP info is, and I’m right!” I’m guessing this means PnP data has moved in Windows 7 or it probably would have worked, too. That said, HunterSoft/Zhanguo.com’s Unknown Device Identifier worked fine on Windows 7).

Unlike Ed Bott’s recent report on installing and living with Build 7057, Windows 7 didn’t recognize all the devices on my HP HDX18-1001xx, as it did on his Dell XPS 420. It only missed on 7 items though, including two Intel ICH9 chipset elements (Thermal Subsystem 2932 and SMBus Controller 2930), the notebook’s built-in HP Webcam and Validity Fingerprint scanner, the ENE CIR Receiver (for IR remote control support), the ATSC/Analog TV tuner card, and the JMicron memory card reader (MS, SD, SD/MMC, xD). A quick trip to the HP Customer Care Web pages for my notebook made downloading the necessary 32-bit Vista drivers a snap. All installed without a hitch. I was even able to use my old tried and trusted DriverAgent tool to check and confirm driver status, as shown here: 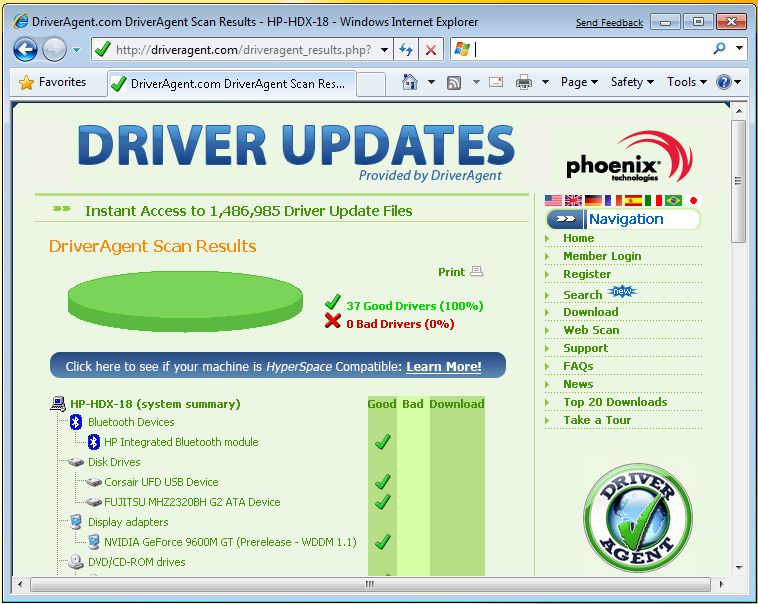 Most impressively, the wireless networking and Bluetooth elements on the system worked flawlessly as soon as the system booted “for real” after the install completed. This is the first time in my experience that wireless connections have worked as quickly and painlessly with Windows as they did here, Vista and XP included.

All this experience and my (mostly successful) navigation of the Windows 7 UI confirms my belief that Windows 7 is incredibly Vista-like. This definitely explains why MS is touting Vista as the right point of departure for getting to know Windows 7, because these two OSes are more alike than they are different. It’s also made working with and getting to know Windows 7 a whole lot easier and faster than I expected it to be.

My next project is to install Windows 7 on an Asus Eee PC 1000HE, but I’m waiting on a USB enclosure for a DVD drive to arrive by mailorder before I can get started on that project–which I’ll be documenting extensively in an article for InformIT.com. Stay tuned here for the high points, and for more information about my Win 7 adventures. So far, so good, however.

Downtheroad - 24 Mar 2009 10:54 PM
That's a good report! I was wondering what was your experience with RadarSync (driver agent competitor yet free one) w/Win7
[-]

Ed Tittel - 25 Mar 2009 8:40 AM
I've now successfully installed the OS (build 7048) on the Eee PC, but I've only read about others using Radarsync with Win7. I haven't actually used it myself with that OS...goes off to take a look...downloading pretty slowly...scan is working...completed...downloading Intel chipset update...installing...working...Chrome update fails ("illegal NTVDM instruction")...all items cleared on re-scan, new items found...installing...more NTVDM errors...all items show as cleared, but when I go into device manager, it shows some drivers actually weren't updated. I'd give it a mixed review based on this single quick experience: looks like it can find and download drivers for you, but that you must follow up to make sure their install completes successfully outside the Radarsync umbrella. For me, DriverAgent worked better because it requires the user to handle the driver install (not as convenient, but more appropriate for a beta OS, I think). HTH, --Ed--