In reading Michael Horowitz’s “Defensive Computing” blog on ComputerWorld this morning (it’s entitled “Windows 7 Restore: less trustworthy than XP?” I was reminded how things can go wonky in a hurry when Microsoft changes its rules for system behavior. And for those who didn’t follow along from XP to Vista and thence to Windows 7, some of those rule changes can lead to some nasty surprises along the way.

Case in point: automatic system restores in Windows 7. As Horowitz quotes from MS documentation in his blog “System Restore in Windows 7 creates a scheduled restore point only if no other restore points have been created in the last 7 days.” XP makes restore points every day by default schedule, so I can see where dropping down from daily to weekly might be problematic, especially on volatile test systems where getting back to a stable state will be easier if users can expect restore points to be less than a week old.

I have several things to say about this phenomenon: 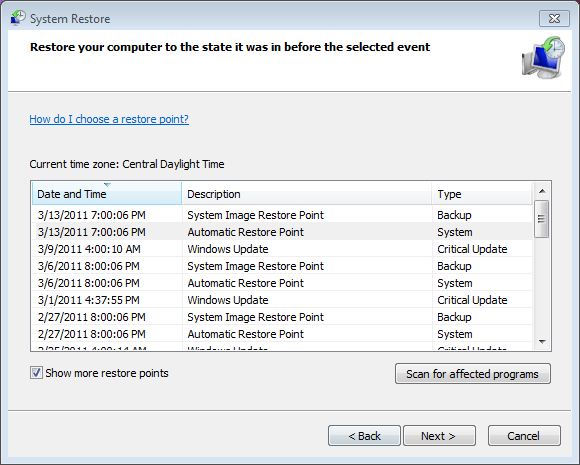 When it comes to Windows 7 restore points, if you don’t like the default behavior, you can — and probably should — take steps to change it. Then you won’t have to be unpleasantly surprised to learn that your most recent restore point is 7 days old, because you can take steps to ensure it will never be any older than whatever frequency you schedule for restore point creation (using Task Manager, or some other automated scheduling tool) or system image backups (using the built-in utility).