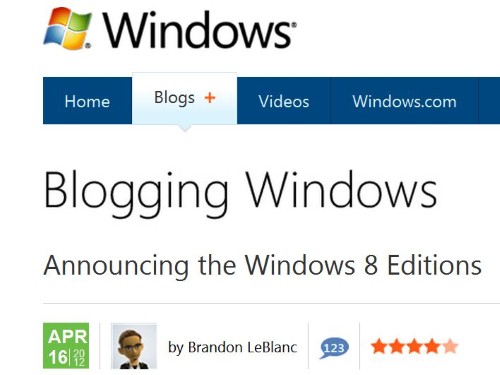 How many editions will Windows 8 have? Two consumer versions for x86/64 machines, one OEM-only version (for ARM processors), and one “specifically for those enterprise customers with Software Assurance agreements.” Oh, and by the way, here’s my favorite quote from Brandon LeBlanc’s April 16, 2012, post to Blogging Windows entitled “Announcing the Windows 8 Editions:”

Windows 8 is the official product name for the next x86/64 editions of Windows.

I’m glad the common name for the new OS has finally been adopted as its real name as well. That said, here’s a run-down of the Editions presented or noted in LeBlanc’s post:

There’s also a spiffy table in this blog post that calls out 41 distinct OS features and recites which editions support which ones. The last items in the table are particularly interesting, as they apply only to Windows 8 Pro (and thus by extension to Windows 8 Enterprise as well): BitLocker and BitLocker To Go, boot from VHD, Client Hyper-V, Domain Join, Encrypting File System (EFS), Group Policy, and Remote Desktop (host). Except for boot from VHD and Client Hyper-V, not too different from Windows 7 Home editions versus Windows 7 Professional, either.