At 11:00 AM Central, 9:00 AM Pacific, Microsoft pushed “Releasing Windows 8 — August 1, 2012” out to the Building Windows 8 blog. It wasn’t so much a set of rumors (see below), as it was a set of educated guesses, apparently. Also, as of today, “… the [Windows] Store is open for business, and we’ll rapidly expland to over 200 markets around the world.” Though the next stop is touted as GA on October 26, no word yet on when the RTM will be made available to corporate users, and to the legions of TechNet and MSDN subscribers. I guess we’ll have to save that for another day!

[Note added 8/2/2012] Peter Bright at Ars Technic reports this morning that MSDN and TechNet subscribers will gain access to Windows 8 RTM on August 15th. See his story about the RTM release to manufacturing for more information. 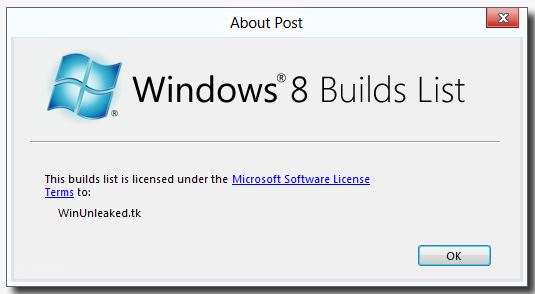 OK, the rumors are flying thick and fast that MS has already signed off on the RTM release, and that it will make its way to OEMs really, really soon: meaning today. I’m watching the MS site for news –especially the Building Windows 8 blog (often the place where release news receives its first official Microsoft mention) — but so far, there’s nothing official. That said, you can find rumors, guesses, and other forms of speculation all over the place that August 1, 2012, is THE DAY for Windows 8 RTM to leave Redmond and make its way into OEM’s no-doubt eager hands. Check out this Google News search to see over 50 stories on this subject, including this doozy from the BGR site in India entitled “Windows 8 RTM leaked, offers more customization options,” itself based on information posted to the Win8China site on July 31.

Windows 8 tracking site Windows8Beta.com also posted a story early today entitled “Windows 8 RTM Already Signed Off?” They quote a report from the WinUnleaked.info Windows 8 build list to the effect that a release numbered 9200.16384.win8_rtm.120725-1247 is in all likelihood the Windows 8 RTM release that will go to OEMs sometime today. With tongue planted firmly in cheek to acknowledge its  “license terms,” I reproduce the builds list graphic as the lead-in to today’s blog posting. I’ll keep check the official MS outlets, and post again later whenever real word comes.