OK, you know that the Windows world has truly come full circle when OS maker Microsoft offers an official Signature (the italics are theirs, not mine, as a quick trip to the Signature page will reveal) designation for PCs (both laptops and notebooks), the idea being to carefully craft runtime behavior and performance to offer fast boot-up and shutdown, and to make sure the system runs at its best when using it for things buyers actually want to do. Shoot, the Microsoft stores even offer a post-purchase signature service for $99, where you bring them a PC and they clean it up for you in the same general vein. There’s even a Microsoft Signature Premium offering available that includes theft recovery, one year of technical support, in-store training sessions, and special offers from the Colossus of Redmond. 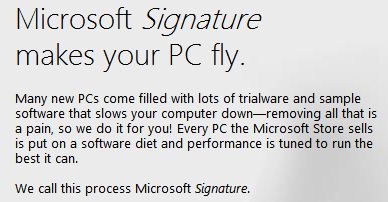 The caption says it all right?

All this led me to recall Jodi Ballew and Jeff Duntemann’s classic book Degunking Your PC (Paraglyph Press, 2005, ISBN: 1933097035, $7.39 and up) which basically explains how to do what Signature does and a whole lot more for Windows XP and 2000 vintage PCs. It also makes me think of several good software tools available to help achieve many of the same ends, such as Piriform’s CCleaner (which used to stand for “crap cleaner” until the anti-pottymouth league got their hooks into them) and the more unabashed PC Decrapifier, both of which I’ve used to very good effect on new laptops to rid them of unwanted stuff piled on by the OEMs who put them together.

But hey, you can now buy new PCs in desktop, slate, or notebook form through the Microsoft Store that are already cleaned up if you like. Or, you can take your current Windows 7 PC in for a Signature service session if you’d care to have somebody else clean it up for you. The prices aren’t as cheap as you can find elsewhere on-line, but you won’t have to clean it up when you get it home, either.

Gotta love it! Will there be a corporate or enterprise version, or is that what special buys from the OEMs have been doing all along? 😉