OK, so I ‘ve been messing around pretty seriously with Windows 8 lately. And in so doing, I’ve also been messing about and learning about my Lenovo X220 Tablet and T520 notebook PCs. One of the things I’ve learned is that you CAN’T use the Windows System Repair Disk (for either Windows 7 or Windows 8, as it turns out) to rebuild a Lenovo notebook or tablet PC from the ground up. It’s because there are some hidden linkages between the primary, bootable partition on the system drive, and a couple of other partitions there as well (a 25.39 GB NTFS Recovery and a 1.17 GB SYSTEM_DRV partition, as shown in the Disk Management screen cap from that machine). 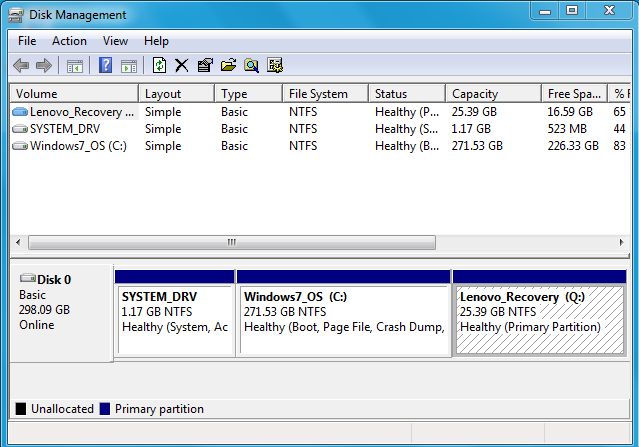 Silly me! And I thought I could jump back and forth between Windows 7 and 8 on my X220 Tablet without taking extraordinary steps. I ended up having to fork over $49 to Lenovo (actually IBM) Tech Support to purchase a set of “factory restore” DVDs to return my tablet to pristine condition. In the future, the right way to proceed when installing unsupported OSes is to remove the unit’s disk drive, clone it (I use the Acronis Clone Disk tool from the Tools and Utilities included in its 2012 True Image Home suite), then mess with the copy while leaving the original alone. I suppose I should have known this in advance, but that’s the way the mop flops sometimes.

Before I could do things the right way, however, I had to undo the damage I’d done to the original install and revert back from Windows 8 to Windows 7 on my hard disk (I’ll be switching to a modestly-priced OCZ Agility 3 SSD for future work, which should speed up my crashes and system destruction/restoration cycles). That meant using an external USB drive because the compact form factor of the X220T leaves no room for an internal optical drive. And therein hangs the “…always something…” part of this blog.

I started out using my handy-dandy InfoSAFE 5.25″ eSATA & USB 2.0 Optical Drive enclosure from StarTech.com, into which I had mounted a LiteON DVD burner. But alas, the drive (or the USB controller in the StarTech unit) proved unable to read the Operating System Recovery Disc for Windows 7 Professional SP 1 that Lenovo had sent me. In fact, it tried so hard to read that optical disk that it wore a visible (and palpable) groove right into the media (as shown in the following photo, which shows the groove on a cropped section of the disk’s optical surface). 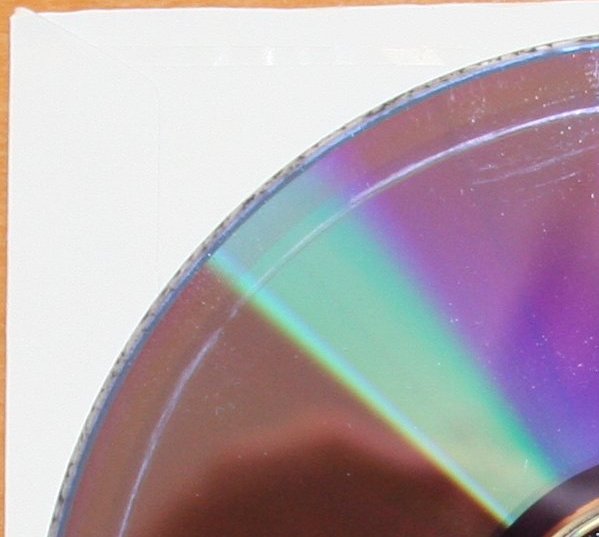 Good thing I bought two of those restore sets — I decided to go ahead and buy a factory restore set for my T520 while I was about obtaining my toolkit items — because even though one of my Windows 7 restore disks got trashed, the other was identical (only the other two DVDs contain specific drivers and stuff for the different notebook and tablet PC models) and still quite usable. So I headed down to Fry’s and plunked down $50 for an Asus portable USB-attached DVD burner, plugged it in, fired it up, and got through the rebuild process a couple of hours later.

But it reminded me that when you’re fixing balky or wounded PCs, there’s always the opportunity for Murphy to pay a visit (or two … or even three) during the repair process. That’s why I’m glad to live in the Austin area, not more than half an hour away from Fry’s where I can pick up pretty much anything I might need for PC repair any time between 8am and 10pm Monday-Friday, with one hour less on Saturdays (they open at 9) and 3 hours less on Sundays (they open at 9 and close at 8). It sure saved my hindquarters this time around, and helped me get up and running in a reasonable amount of time. It’s also the first time I’ve ever had an optical drive “eat my homework,” but golly if that isn’t just what happened!

Ed Tittel - 21 Mar 2012 5:07 PM
Dear Alexsea: Thanks for the feedback. Glad you found this useful. It's really been quite interesting dealing with upgrade vs. clean install issues going from Windows 7 to Windows 8. There are quite a few subtleties I could not expect, particularly when dealing with driver issues. I'm increasingly leaning toward recommending clean installs even on Windows 7 machines because Windows 8 brings a new and simplified approach to drivers that works very well, and removes a lot of the existing complexity in version up to and including Windows 7. I'll be blogging in detail about this soon, after I get more experience under my belt. Best wishes, --Ed--