For several months now, I’ve been interacting with the folks at Zinstall about their various products, most notably Zinstall XP7.  This tool works with any version of Windows 7 (including Starter, Home Basic, and Home Premium) to migrate an existing, standalone Windows XP runtime environment into a Windows 7 based virtual machine that matches the original version in every respect.

As the proud and sometimes impatient owner of an Asus 1000HE Netbook (which I’ve upgraded to 2 GB of RAM, and in which I use a Samsung SSD instead of the original 5400 RPM hard disk, impatient user that I am) I had an “interesting” XP target machine that I needed to update to the RTM version of Windows 7 anyway. So I prepped my machine for a Windows 7 install, which included some interesting misadventures in switching from the unit’s convention HD to the Samsung SSD, as I relate in a companion blog, and after installing and updating the 1000HE for Windows 7, then bringing all the drivers up to the latest and greatest versions (thanks to my personal fave Web- and subscription-based driver management tool, DriverAgent.com), I tackled Zinstall XP7 next.

The total time for the install was pretty lengthy — longer than installing Windows 7 itself, in fact, but not longer than applying the 45-odd updates to the base image, nor longer than downloading and updating all the drivers — at around 63 minutes give or take a few seconds (see the time log that follows later in this blog for more details). But the program worked like a charm, and delivered on its promise to return my former standalone XP desktop environment in the form of a VM running under Windows 7. But it turns out that the poor little Atom N280 in this machine just isn’t up to the task of running an XP VM inside Windows 7. Everything worked for me, to be sure (aside from a few brief hiccups with display resolution, quickly fixed once I figured out how to regain control over the mouse and my virtual desktop), but it was so painfully slow that I found it intolerable for any kind of real work. That said, it’s incredibly convenient to be able to return to that runtime environment as and when I need to grab files and information from my prior installation to copy or otherwise import them into the new Windows 7 desktop environment.

Here’s the timetable for my install activities, which also explain the various stages of the Zinstall XP7 installation and conversion process. Here’s a screenshot of the pre-final program display, that names all of the steps in the process. 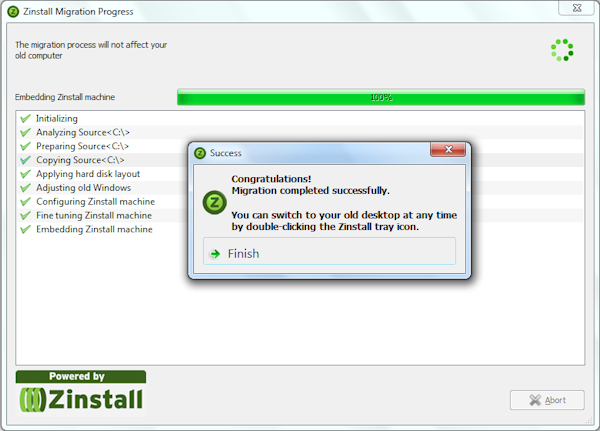 The list of steps and my timetable ran as follows (times are in mm:ss format):

There were some times during the fine-tuning stage when I despaired of successful completion, because the progress bar for this sub-task seemed to hang at the 95% point nearly forever, but the program did eventually complete successfully and deliver me a copy of my previous XP runtime environment inside a working (but painfully slow, on this underpowered netbook) virtual machine. It was also easy to switch back and forth between the Windows 7 desktop and the XP desktop by using the notification area icons that Zinstall provides both for XP and Windows 7 for that purpose.

When I loaded Zinstall and had it convert my XP environment to a VM, I elected the “convert in place option.” Zinstall can also migrate the XP image from one machine to another across the network, or from one drive (the old system drive, presumably) to another (the new system drive) on the same machine. Everything I saw about the program, as constrained as my netbook was for memory and CPU resources shows me that the program is well-built, very stable, and quite capable. In fact, things should go much, much faster on more powerful hardware, and it’s a real testament to the program’s capabilities that it worked without a hitch on a machine with 1 GB less memory than the recommended configuration for such an in-place install, and on such a puny processor as well. At $89 this program is an excellent value for the money (SMBs and enterprises facing volume migrations should look to the company’s volume purchase offerings, which add a migration server with centralized automated control into the mix).

Sciascr - 17 May 2012 8:45 AM
I am disappointed with the Zinstall XP product. While it created the XP environment and ported everything, I am not able to print from the VM. I followed the procedures provided in the Zinstall XP user's guide with no success. Support from Zinstall is non existent. The company will not answer any basic questions. It requires purchase of an additional $100 of support. I am finding that if I want to print, I have to re-install the programs in Windows 7. This defeats the purpose of the Zinstall XP VM. The company is aware of these issues but doesn't disclose them when they sell you the product. They sell the product by promising that "everything will work just as before". This is not true if you can't print.
[-]

Ed Tittel - 17 May 2012 1:02 PM
I had no idea! Never tried to print from the VM, so I didn't know about this problem. That said, you should be able to print to file, then print the file later from the native OS, as an interim workaround. All I can think is some kind of generic class printer driver issue must be at fault here. Strange that Zinstall wouldn't help, and I hope they suggested this workaround. Post again here if you want me to stick my nose into this sitiuation on your behalf, and sorry for your troubles. --Ed--