One of the most important steps in a MetaFrame Presentation Server farm design is to decide what applications you’re going to install on which servers. As many of you know, I’ve spent the past three months traveling and talking about Citrix throughout the world. From a design standpoint, this application issue is huge.

Fundamentally, you have two basic options:

Option 1. Install All Applications on All Servers

There are several benefits to doing this. Users who access multiple applications only need to connect to one server. Greater economies of scale can be realized since every user can be crammed onto a few servers. Certain aspects of this environment could also make it easier to manage since all the servers would be configured the same.

Unfortunately, deploying each application to every server also has some downsides. The biggest issues are around application compatibility. The more applications you install on a single server, the greater the chance that you’ll have two applications that conflict with each other. This will also increase the amount of testing you have to do whenever there is an application update since you’ll have an increased chance of an incompatibility.

Advantages of Putting All Applications on All Servers

Disadvantages of Putting All Applications on All Servers

Option 2. Install a Few Related Applications on Each Server

The alternative to installing all of your applications on all of your servers is to instead install only a few related applications on each server (even if all the servers are members of the same farm). This will essentially create a server farm made up of multiple groups of load-balanced servers, each group containing a subset of the entire farm’s applications. These small groups of servers are called “silos.” (I personally used to call these things “farmlets,” but that term didn’t catch on. The de facto industry term is “silo.”)

If you decide to create multiple silos, the first thing you need to do is to take a look at your application list and figure out which applications make sense to group together into each silo. (I think it’s unrealistic for every single application to have its own silo, so instead I create silos for groups of applications.)

It’s usually easiest to make a list of your applications along with the number and types of users who use them. For example:

Looking back at our example, I would probably group Microsoft Office, Visio, Acrobat, and possibly IE into one silo. I would then put SAP and Crystal Reports into a second silo and the data warehouse and production applications into a third silo. I can probably group the HR and payroll applications together and put them in their own silo, and then I might make a fifth silo for Time Tracker.

Taking a step back from this, I now see that I have five silos. The problem here is that for redundancy purposes, the N+1 redundancy now has to be done at the individual silo level. This means that because I have five silos, I have five redundant servers. Looking at my silo choices, I see that the decision to put the HR application (used by only 15 people) and the payroll application (used by 20 people) in their own silo was a bit extreme. There’s no way I need to full servers for these 35 people. Instead, I’ll probably throw these two applications into one of the other silos.

However, it’s possible to get the advantages of silos while still offering published desktops to those users who need them. You can do this with a three-tier application architecture.

In creating a three-tier architecture, you’ll create a dedicated silo for your users who require published desktop access. Users will connect to a published desktop within that silo. Then, using ICA client software installed on the MetaFrame servers in the desktop silo, users will launch additional ICA sessions to published applications on the back-end application silos. This “double-hop” ICA architecture is what’s known as “ICA passthrough” (not to be confused with “passthrough authentication,” which is something completely different). ICA passthrough works great, and your users won’t even know that they’re using it. Most people will build this architecture by installing the Program Neighborhood Agent client on the MetaFrame servers in the desktop silo. Therefore, when users launch their remote desktop session there, shortcuts for published applications on the backend silo servers automatically appear based on their permissions. 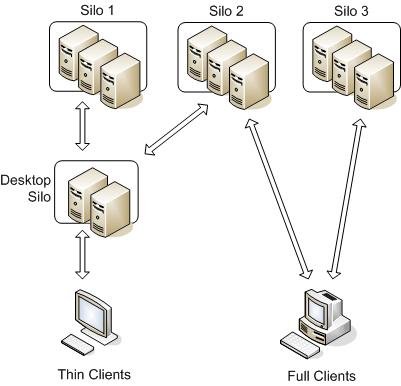 How to Decide what to do in your Environment

Now that you’ve seen the various architectural options, you’ll need to decide which approach is best for you. As I mentioned previously, I personally like to make a list of applications and consider them one-by-one. I do this by asking the following questions about each application:

Application Groups
If you have certain groups of applications that are used by the same groups of users, it might make sense to confine them to selected servers. Many companies keep all applications specific to a department on MetaFrame servers separate from those that host company-wide applications.

Server Resources Needed
If you have many applications that require significant server power, it may not be possible (or economical) to put them on the same server as other applications that also have high resource requirements.

Client Devices
Do your clients have the capability to run published applications, or will you also have to publish the desktop? This will determine whether you even need to make a desktop tier

As I mentioned previously, this issue is one of the bigger decisions that you’ll need to make when designing your server farm. I’ve tried to accurately capture all of the data you’ll need to make this decision, but please feel free to share your comments and opinions about what you like to do in your own environments.