Differences in desktop hardware do not have to affect system maintenance the way they once did. Most midsize to large organizations use desktop images to deploy operating systems and applications to PCs. IT administrators can easily circumvent the problem of dissimilar hardware by building all of the Windows device drivers that an organization uses into the deployment image.

I once read a magazine article that described how an airline had dramatically cut its maintenance costs by limiting its fleet to a single type of aircraft. I remember thinking that the same concept could easily be applied to desktop computers. After all, different hardware requires different device drivers, and support technicians need to be aware of several other device-specific issues. Using the airline approach made sense, and for a while, it really did help make things easier.

Ultimately, however, this approach proved to be shortsighted. As technology evolved, I was forced to replace aging components with new hardware. Furthermore, as my organization grew, I often had to purchase hardware that was different from what was already in place. Simply put, it's impossible to strictly maintain desktop hardware consistency.

The first step is to create a folder on your network containing all of the Windows device drivers that could be used by your desktops. Since device drivers are periodically updated, it is a good idea to organize this folder into a series of subfolders, which makes it easy to locate specific device drivers. For example, you might place a driver for a Creative Labs Sound Blaster card in a folder named C:\Drivers\Audio\Creative.

Once you have created a central repository of Windows device drivers, it is time to build them into the desktop image. Microsoft's tool for deploying Windows onto corporate desktops is the Deployment Workbench. As you can see in Figure A, there is a container beneath each deployment share called Out-of-Box Drivers. If you want to make a driver (or a collection of drivers) available within the deployment share, select the Out-of-Box Drivers container, and then click on the Import Drivers link, found in the Actions pane.

Figure A: Select Out-of-Box Drivers container and then click the Import Drivers link.

At this point, the Deployment Workbench will launch the Import Drivers wizard. The wizard's initial screen asks you to provide a path to the driver directory. You should specify the top-level driver folder. For instance, in my example above, you would use C:\drivers rather than C:\drivers\audio\creative. When you specify a top level folder, then all subfolders are included automatically.

Once you have made the Deployment Toolkit aware of your driver collection, make sure that the drivers are included in any OSes that you deploy through the toolkit. Operating system deployments are based on task sequences. In other words, any OS installation consists of a series of tasks that must be completed. One of these tasks is the injection of device drivers.

Assuming that you have already created a task sequence for deploying a desktop OS, you must navigate through the Deployment Workbench's console tree to Deployment Shares | <your deployment share> | Task Sequences | OS Install. At this point, you must right-click on the task sequence that corresponds to your OS and then select the Properties command from the shortcut menu. When you do, Windows will display a properties sheet for the task sequence. Select the properties sheet's Task Sequence tab. 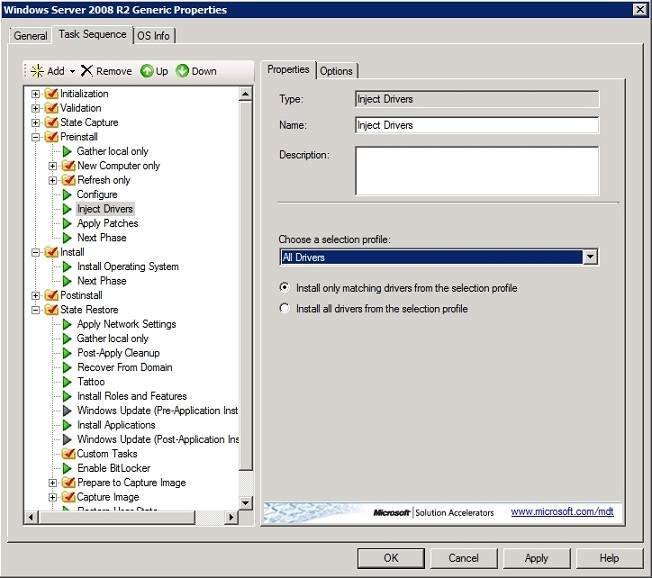 Figure B: You can choose to install All Drivers.

Now, navigate through the console tree to Preinstall | Inject Drivers, as shown in Figure B. As you can see in the figure, the Deployment Workbench is configured to inject all drivers into the deployment image as a part of the task sequence. This is an ideal approach, because the Windows Installer will be able to use the drivers that it needs while ignoring all other drivers. If you have drivers that exist as packages, however, then you will need to change the selection profile from All Drivers to All Drivers and Packages.

Device driver management for Windows desktops can be a relatively straightforward process. The trick is to be aware of the device drivers that are being used throughout your organization and to create a centralized collection of the drivers that desktops might require.

ABOUT THE AUTHOR:
Brien Posey is an eight-time Microsoft MVP with two decades of IT experience. Before becoming a freelance technical writer, Brien worked as a CIO for a national chain of hospitals and health care facilities. He has also served as a network administrator at some of the nation's largest insurance companies and for the U.S. Department of Defense at Fort Knox.