By
With Windows Vista and Windows Server 2008, Microsoft increased its emphasis on Storage Area Networks (SANs). One of the ways the company did this was by including an iSCSI Initiator with both operating systems. Let's take a look at Microsoft's iSCSI Initiator and how it works.

In case you're not familiar with iSCSI, it is a storage networking technology that allows SCSI commands to be sent over an IP network. Prior to the development of iSCSI, most SANs required expensive, special cabling (usually Fibre Channel). With iSCSI, however, the cabling no longer matters because iSCSI commands can be sent over Local Area Networks, Wide Area Networks or even the Internet.

In an iSCSI environment, storage devices are referred to as targets. A target can be a disk, tape drive or any other SCSI-based storage device. In order for a computer to connect to a remote target, it uses the iSCSI Initiator to establish connectivity to the target. As I mentioned earlier, an iSCSI Initiator is included with Windows Vista and with Windows Server 2008.

You can access the iSCSI Initiator by opening the Control Panel and clicking on the System and Maintenance link, followed by the Administrative Tools and the iSCSI Initiator links. When you do this for the first time, Windows will display a warning message telling you that the iSCSI service is not running and asking if you want to start it. If you choose to start the iSCSI service, then it will launch automatically each time Windows is started from then on.

Next, you should see a prompt asking if you want to unblock the Windows firewall ports associated with the iSCSI Initiator. You will have to answer yes to this prompt. Otherwise, Windows will generate an error message when you attempt to connect to a target.

At this point, Windows opens the iSCSI initiator, as seen in Figure A. The properties sheet's General tab is selected by default. The first option on this tab allows you to change the Initiator's name. Each iSCSI Initiator must be assigned a name, but you can usually get away with using the default name. There are three different naming conventions used by iSCSI, but the Windows implementation uses a naming convention known as IQN, or iSCSI Qualifying Name. 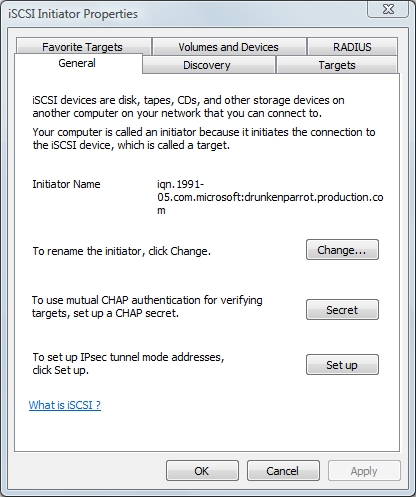 The General tab contains a couple of other options. With one option you can specify a CHAP secret in case you want to use mutual CHAP authentication for verifying targets. The General tab also gives you the option of setting up IPsec tunnel mode addresses for IPsec encryption. 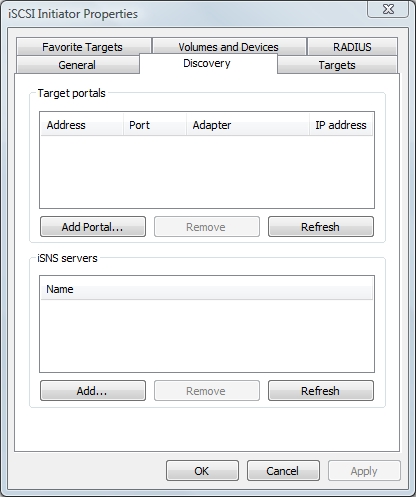 The next tab you will encounter is the Targets tab, shown in Figure C. Clicking on this tab gives you a list all of the targets that have been detected. You can then select a target and click the Log On button to attach to it. The Favorites tab lists your favorite targets. A target is considered to be a favorite if you have logged into it. 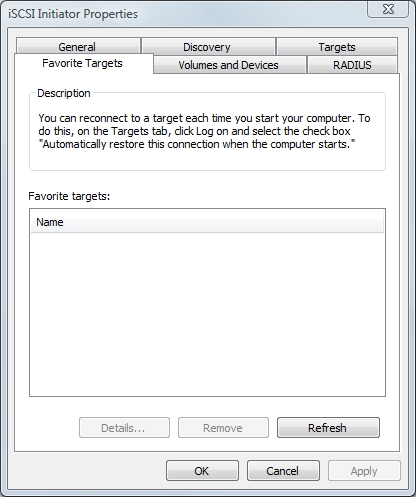 The Volumes and Devices tab 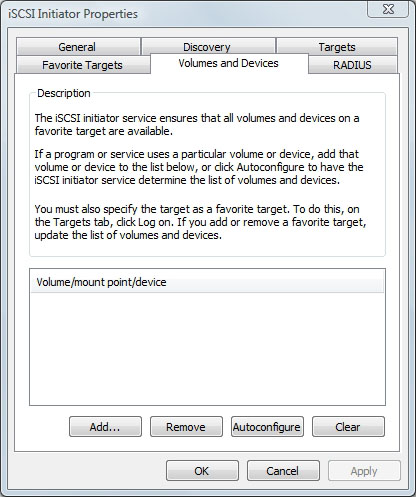 Allowing clients to attach to targets without any kind of authentication taking place presents a major security risk. Typically, authentication is performed by a RADIUS Server or an Internet Authentication Server (IAS, Microsoft's own version of RADIUS). The RADIUS tab, shown in Figure F, allows you to tell the iSCSI Initiator which RADIUS server you want to use for authentication. You have the option of listing multiple RADIUS servers, which will be used in the order that they are listed. 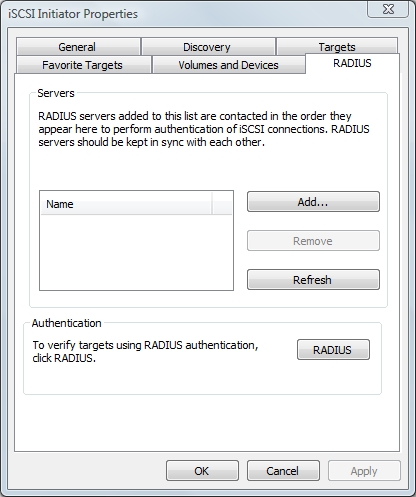