By
Part 1 | Part 2 | Part 3 | Part 4 Previously, I wrote about a free tool administrators can use called the Windows Vista Upgrade Advisor to determine if applications running on a PC are compatible with Windows Vista prior to upgrading. Although the Windows Vista Upgrade Advisor does a good job, it is only practical for use in organizations with very few PCs. Fortunately, Microsoft also offers a free tool for assessing Vista readiness in larger organizations. The tool is called the Application Compatibility Manager.

The Application Compatibility Manager is part of a larger suite of tools called Business Desktop Deployment 2007 (BDD 2007), and you can download it from Microsoft's website. 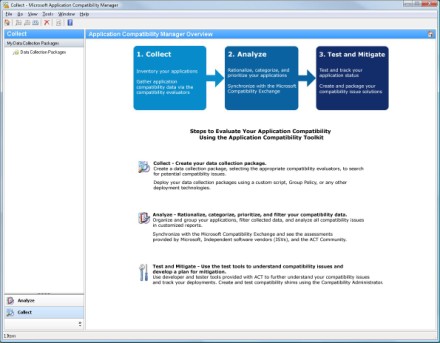 Once the Application Compatibility Manager is up and running, the first thing you will have to do is collect an application inventory from each workstation. In order to do that, you have to install an agent onto each workstation that you want to collect an inventory from. Don't worry, this is easier than it sounds. If you click on the Collect option, shown in Figure A, it takes you to the dialog box shown in Figure B. This dialog box allows you to create an agent. 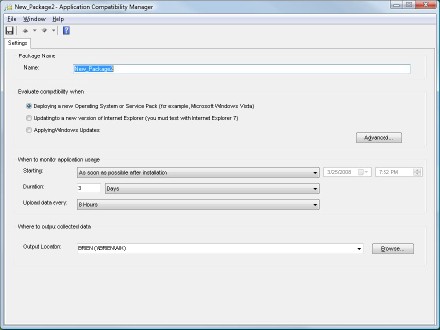 As you can see in the figure, all you have to do is specify a package name (this is the name of the installation package containing the agent). Next, verify that the Deploying a New Operating System option is selected and that the output location is set to a UNC share to which the agent will have read and write access. You should also set the starting time, duration and update period to meet your needs. When you are done, click the Save icon and the agent will be created.

The agent itself consists of a single MSI file. The easiest way to deploy the agent is through Group Policy. Using this method, you should assign the installation package on a computer basis. To do so, open the Group Policy Object Editor and navigate through the console tree to Computer Configuration | Software Settings | Software Installation. Then right-click on the Software Installation container and select the New | Package commands from the resulting shortcut menus. Next, just specify the installation package that you want to use, and you're in business.

When the data collection process is complete, open the Application Compatibility Manager and click on the Analyze option. You will then see a screen that's similar to the one shown in Figure C. This screen tells you how many computers were inventoried and how many different applications were detected. On the left side of the figure, you will see a tree. Choose the Applications container beneath the Windows Vista SP1 Reports section and you will see the screen shown in Figure D. 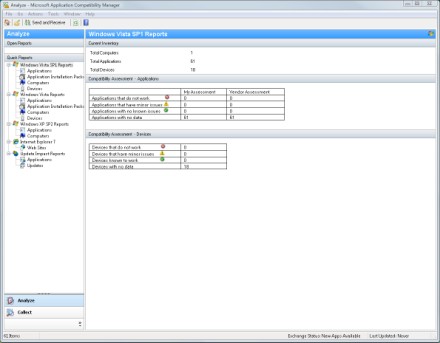 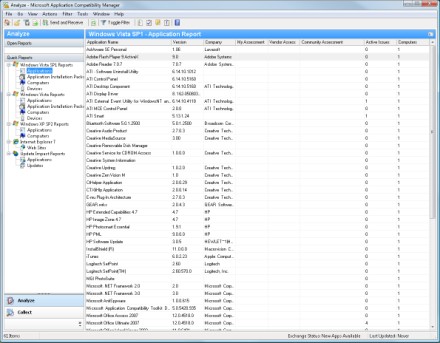 Figure D displays a comprehensive list of all of the applications that were detected across the entire enterprise. Unfortunately, Microsoft does not tell you whether or not each application is compatible with Windows Vista. It's up to you to test each application and find out.

Once you determine an application's compatibility, right-click in the My Assessment column for that application and choose the Assessment command from the resulting shortcut menu. You will then see the dialog box shown in Figure E, which allows you to specify whether or not the application works with Windows Vista. 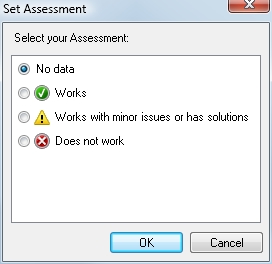 While you are at it, I also recommend right-clicking on the various columns at the top of the chart. That will give you the option of choosing which columns are visible and which are hidden. I would advise you to display a column called Deployment Status. When you right-click on an application, you have the option of setting a deployment status for that application, as shown in Figure F. As you can see in the figure, the deployment status helps you keep better track of the compatibility testing process. 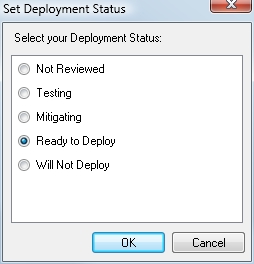 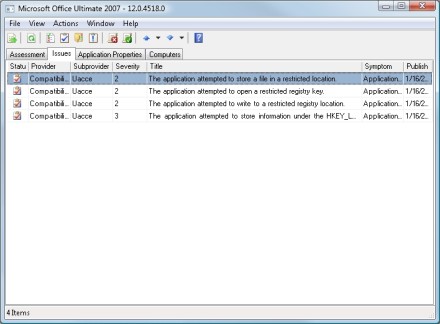 I should point out that you can use the icons at the top of the Issues tab to create your own issues or provide record a solution to an issue. You can do this even if Microsoft hasn't listed any issues for an application. Recording the compatibility issues that you encounter and their solutions is a great way of keeping track of issues you discover while testing an application for Vista compatibility.

Why they exist and what to expect