Normally, when Windows is unable to boot, I advise people to boot the system into Safe Mode. Safe Mode loads the Windows operating system using a minimal set of drivers and services. The basic idea is that the components that are most likely to have caused the problem are omitted and, subsequently, you can load a "minimalist" version of Windows and use it to repair the problem.

The problem with Safe Mode is that it isn't an alternate operating system; rather, it's a watered down version of the OS that you are trying to repair. As such, there is always a chance that some of the required components for use in Safe Mode are the same damaged components that prevent Windows from loading. When this happens, using Safe Mode won't help. Fortunately, there is an alternative -- the Windows XP Recovery Console.

If you would like to proactively install the Recovery Console onto a machine's hard drive so it will be available during times of crisis, you must begin the process by booting Windows and logging in as an administrator. After doing so, insert the Windows XP installation CD and click Exit when the Windows XP splash screen appears.

At this point, you must open a Command Prompt window (available on the Start | All Programs | Accessories menu), and enter the following command:

There are two things you must keep in mind when you enter this command.

The entire installation process is automatic, and there is nothing else you need to do other than clicking OK when you see the screen shown in Figure B.

Notice in Figure B that the dialog box indicates that you should use the Help command to view the commands that are available to you through the Recovery Console. This further illustrates the point that I made earlier about the Recovery Console being different from a normal Command Prompt environment. 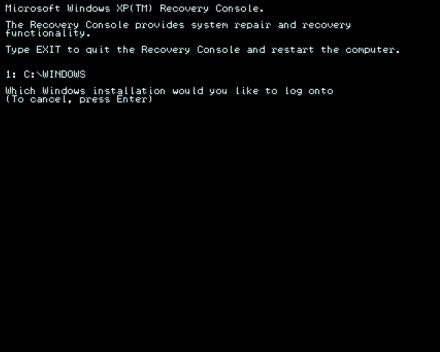 As you can see in Figure C, the Recovery Console displays any Windows installations that have been detected on the system's hard drive and assigns a number to each of these installations. Enter the number that was assigned to the Windows installation that you want to work with and you will be prompted for the local administrator's password for that installation. After entering the password, you will be taken to a rather normal looking command prompt, as shown in Figure D. 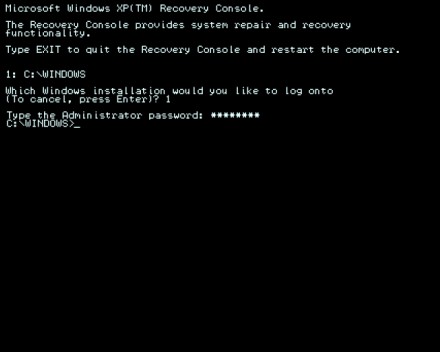 How to install it

How to use it